“Historic New Orleans Walking Tours is the place to go for authenticity rather than sensationalism.”

“The best tour is conducted by historian Robert Florence…”

“Voodoo oriented tours abound in New Orleans, but the one led by writer and former Jean Lafitte National Park ranger Robert Florence emphasizes the practice’s traditional heritage and history, rather than myths and tall tales.”

“Among the high-camp, overpriced and the plain silly, there are nonetheless a few tours worth joining: Historic New Orleans Walking Tours offers professional, fascinating insights…”

“If cemetery expert and writer Robert Florence isn’t leading this Garden District Tour, then one of his very knowledgeable associates will be. The Garden District Tour hits all the highlights including architecture, celebrities homes and a tour of Lafayette Cemetery #1.”

“For an entertaining, fast-talking tour of St. Louis #1, one of New Orleans’ most illustrious and historic cemeteries, contact Historic New Orleans Walking Tours and ask for proprietor Robert Florence

“Of the many voodoo tours available, voodoo proponents most highly regard the no-hype cemetery and voodoo history tour sponsored by Historic New Orleans Walking Tours.”

“The two hour Cemetery and Voodoo History Tour is a fun and creditable ramble led by Robert Florence, a former ranger for Jean Lafitte National Park, or one of the accredited guides from his staff.”

FROM THE LONDON DAILY TELEGRAPH:

“Why did anyone build a city here at all, below sea level in a malarial swamp infested with snakes and alligators? To control the river and to trade on it. At first it grew like topsy; by 1840 it was the fourth biggest city in the States. In its humid, fever-ridden, isolation, it was also by some margin the most exotic. With its mix of Creole, Cajun, Caribbean, African, Irish, Italian, German, Jewish, and everyone else you can think of, it was mutating into something unique in the world.

A good slice of that special weirdness can be had on the cemetery tours led by a hugely entertaining and credibly skeptical guide, Robert Florence. Beyond the macabre matter of why the dead are buried above the ground (when they buried people underground, every time the swamp flooded it washed bodies down the street), Florence describes New Orleans as a town where the “voodoo priestess, pirates, riverboat gamblers, thieving politicians, Storyville pimps and prostitutes define history” – so history’s not always too exact.

“I know, for example, of six places in this city where Jean Lafitte is buried. He’s also buried in Illinois, Charleston, Tampa, Galveston, Paris, two places in the Yucatan peninsula, and in a town about twenty miles south of here called Lafitte, next to Napoleon Bonaparte and John Paul Jones”

Thank you for the wonderful work that you do on behalf of the city of New Orleans and the state of Louisiana.

I am very pleased to hear the positive role you are playing in the promotion of cultural tourism in New Orleans.

The museum exhibit sounds fascinating. Best wishes for the holiday season and I look forward to hearing from you soon. 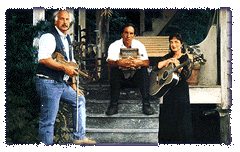 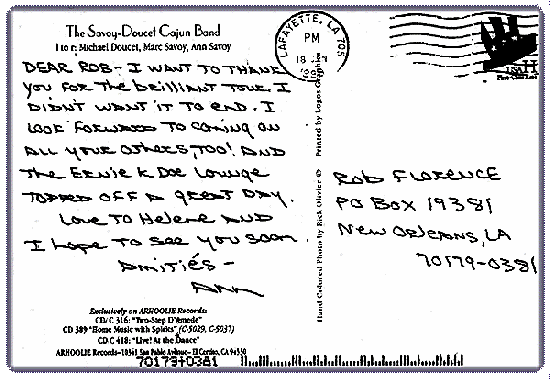 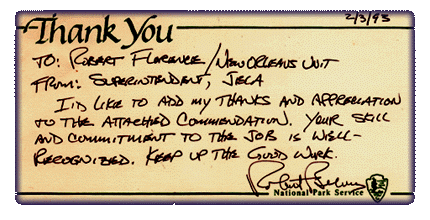 WHAT OUR CLIENTS HAVE TO SAY...

Robert, I need to thank you for the magnificent performance your staff did during our 1st stay in New Orleans. Because of the impression your company and even more importantly, its guides, had on myself and my group, we will be sure to tell everyone what a ‘MUST DO’ the Historic New Orleans Tours are!! From the feedback I have received from friends who have done a few other guided tours from other companies, I am convinced we had the best with your staff!!By recommendation from Frommer’s, we wanted to try one of your tours before committing to more.We tried the Cemetary/Voodoo tour and had Lloyd Sensat. The man is so knowledgeable and his laugh was just hilarious!! He was entertaining and really helped to explain the dark yet very intriguing and important history of the cemetery, religious and voodoo aspect of New Orleans. He presented the material in an easy to comprehend, yet detailed manner. He knew the history behind so many of the tombs and really pointed out details that would be easily missed. First impressions are everything, and thanks to Lloyd, he made our decision very easy to try more of the tours. We immediately planned on doing 3 more tours before we left. So we did the Garden District Tour, the Haunted Tour and the French Quarter Tour.For the Haunted Tour we had Karen (I believe), red-haired, smily and so enthusiastic. You could see she really has a passion for her job and what she does. She had some amazing stories and the fact that she works with teams that search for paranormal activity is an awesome asset to her tour guiding. She was very gracious in concern for our safety as it was a dark and wet night and she kept a very careful watch for us in the streets with traffic. She made the facts really stand out and it wasn’t the ‘hocus pocus’ of some of the other tours. She was very interactive and really made sure questions were fully answered.For the Garden District Tour we had Jane. Talk about a gal who really knows her stuff!! She was absolutely amazing the way she educated and entertained. She knew the Garden District like she had built it herself!! She has such a strong background in horticulture, botany, history, lecture and a very witty personality. I loved that she knew many of the owners of the houses we saw and even knew the names of their pets! As we passed one of the other tour groups, I overheard someone ask the other tour guide about one of the houses and the tour guide simply stated “Oh, that pink house? That house isn’t on the tour”. Moments after I heard that Jane stopped in front of that pink house and started giving us the history of it. Here’s the best part, as the other tour group started to walk away, the man from the other tour that got shot down by his tour guide actually stayed behind to listen to Jane, and then ran to catch back up with his tour group. Just another example of how dominant and complete your tours and tour guides are.Lastly we did the French Quarter Tour with Leon. Now that’s a guy who knows history, names, dates and events!! He really brought out the beauty and history of the French Quarter and painted the complete picture of how the French Quarter was formed and is what it is today. He really knew the stories behind the monuments, Jackson Square, the river, the streets and so many of the buildings. We did this tour at 10:30am and we had a 3pm flight back home. It was the last thing we did in New Orleans and let me say, it was the best way to close such an amazing vacation. Leon really made a great last impression for Tour New Orleans and more importantly, the city of New Orleans.I will be sure to recommend your company and especially the tour guides we had (Jane, Karen, Lloyd & Leon) to any and all who I talk to who are heading to the Big Easy. Once again, please thank your amazing tour guides for such a great experience in proving that New Orleans is still a thriving city with rich history and culture. Katrina may have set New Orleans back a bit, but thanks to companies like yours and people like you and your tour guides, I know that very soon you will be prospering even more than pre-Katrina!Very satisfied,Mark AquinoBuffalo, NY