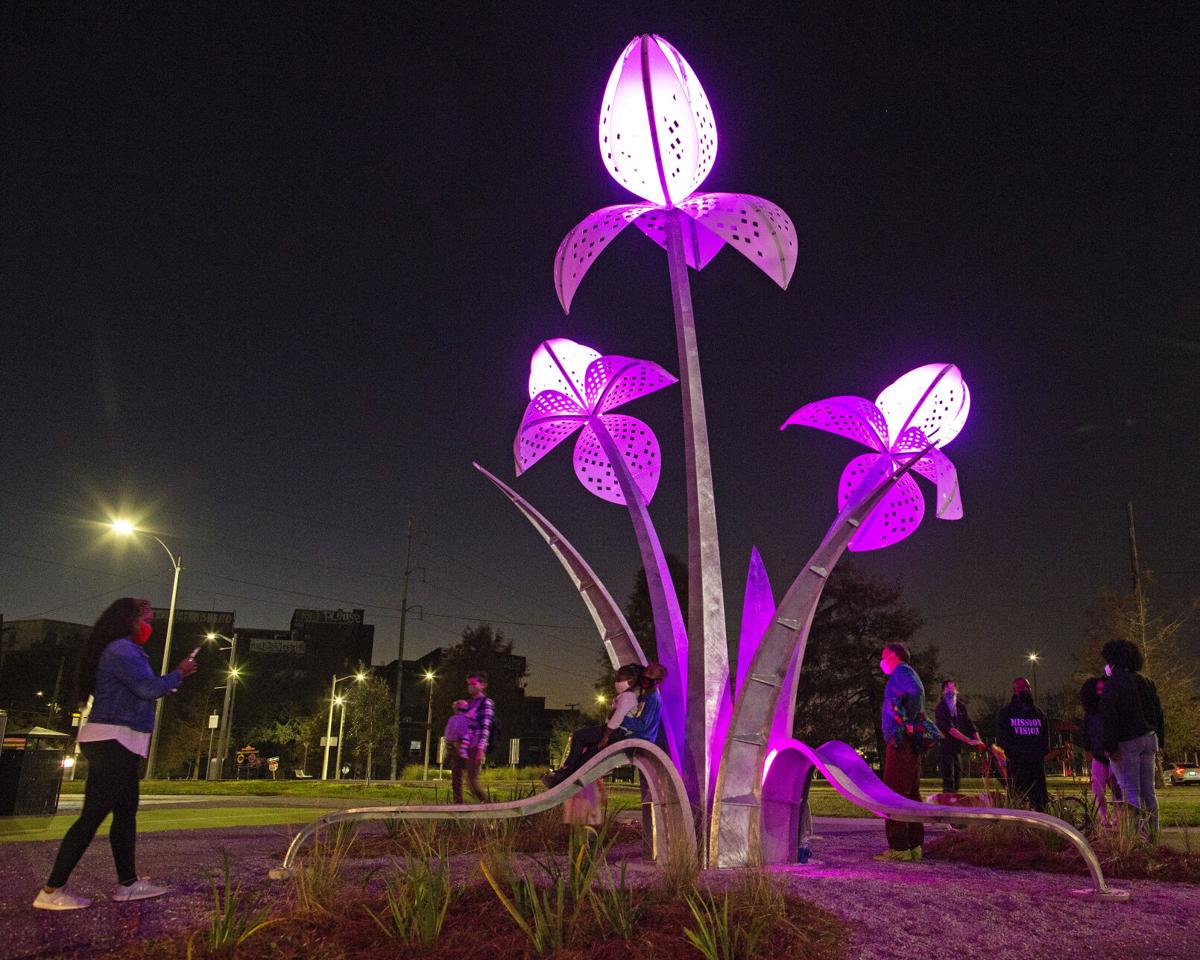 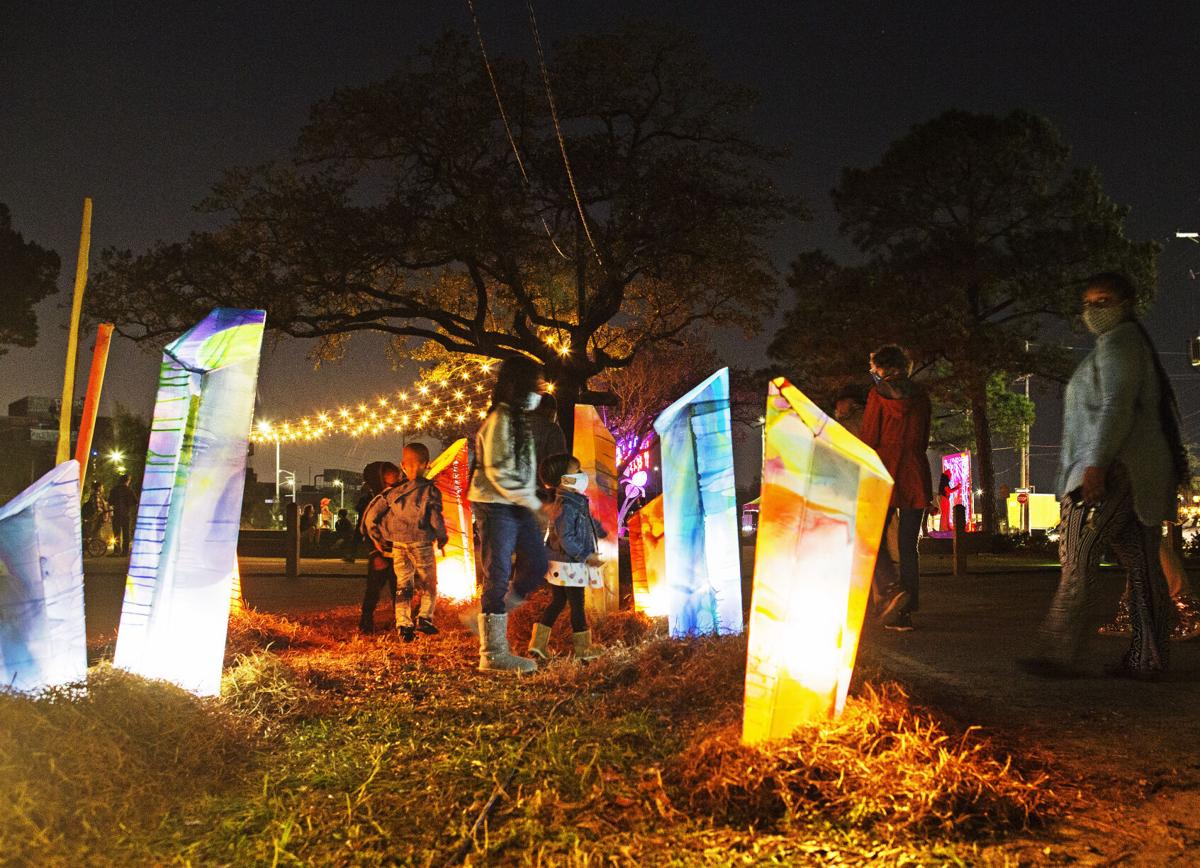 The colorful ground murals by Brandon Surtain are new permanent features of the Greenway in New Orleans, La. Wednesday, Dec. 9, 2020.

The city installed new cameras, call boxes, and other improvements at the Lafitte Greenway in 2019.

Bike riders make their way through the Lafitte Greenway for Bike to Work day in New Orleans in April 2019.

A family rides along the Lafitte Greenway past the closed Lemann Pool that is closed because of coronavirus in April 2020.

Alec Parker, 13, left, and Alexis Parker, 16, right, take shelter from the rain as the Mystic Krewe of Nyx, along with the New Orleans Recreation Development Commission, open the first of three inclusive playgrounds funded by the krewe along the Lafitte Greenway in January 2020.

A cyclist on the Lafitte Greenway in Mid-City in 2018.

Personal trainer Jess Abercrombie, background, works with client Emily Meyer at the FitLot on the Lafitte Greenway outside Sojourner Truth Community Center in New Orleans in January 2020. The Fitlot is a public outdoor fitness space that provides shade and a soft surface for people on exercise on.

Eventgoers dine and drink during the Friends of Lafitte Greenway’s Hike the Greenway 2018 block party at Second Line Brewing in New Orleans.

A playground area in the Lafitte Greenway was complete in January 2017.

Pine trees were planted along the Lafitte Greenway in January 2017.

For Mid-City resident John Coyle, the Lafitte Greenway’s growth over the past five years has paralleled his own development as an architect. He stumbled across the abandoned railway corridor while riding his bike in 2013 and made it the subject of his thesis project. In 2015, when the 2.6-mile Lafitte Greenway opened as an urban linear park and bike trail, Coyle started volunteering as a Greenway ambassador. This year, Coyle became project manager for Greenway Plaza, a pedestrian plaza just opened on the Lafitte Greenway.

“It has been a labor of love for my team and I,” said Coyle, who provided design-build services via his firm, Urbanscapes Design + Build.

Greenway Plaza (3200 Lafitte Ave.) occupies the driveway of a former brake tag inspection station in Mid-City. That brake tag station underwent a renovation funded by $1.1 million from FEMA and $545,000 from bonds and opened in March as a public recreational facility.

Its former driveway, where cars lined up to be inspected, remained relatively plain until the COVID pandemic brought citywide lockdowns. Then, Friends of Lafitte Greenway, the New Orleans Recreation Development Commission and the Arts Council New Orleans conceived of a $100,000 art installation project as a way to meet the public’s need for outdoor gathering places during the era of social distancing.

“(The Greenway Plaza) is a rapid-build project that happened during COVID-19, responding to the need for more outdoor space for people to experience the city and enjoy the outdoors,” said Sophie Vorhoff, director of Friends of Lafitte Greenway.

“We’re doing place-making with this site — which means taking over this space that has been disused and sprucing it up with public amenities,” said Friends of Lafitte Greenway board member Kevin Centanni.

“In Treme and Lafitte, the Greenway’s Great Lawn has turned into a hub of activity and programming — you see people playing soccer and having picnics,” said Vorhoff. “This will be another space for that sort of flexible programming right in the heart of Mid-City.”

To celebrate the Greenway Plaza’s installation and the Lafitte Greenway’s five-year anniversary, Friends, NORD and the Arts Council New Orleans’ LUNA Fete will throw a free, outdoor, light-based art exhibit called Supernova. It takes place from 5 p.m. to 9 p.m. Dec. 9-Dec. 20 at the plaza and brake tag pavilion building and features 10 glowing art installations. The celebration combines elements of LUNA Fete, which will scatter installations citywide this year instead of concentrating them at Duncan Plaza, and the Greenway Soiree fundraiser, which was canceled due to the pandemic.

“(Supernova) is a free exhibit, but we’re encouraging people to make donations to Lafitte Greenway in exchange for perks at local businesses,” Vorhoff said. “This is an opportunity for us to promote foot traffic and get people to go out and spend money on local businesses that have been amazing partners for the Greenway.”

Jeff Schwartz, director of economic development for the City of New Orleans, says the initial cost for developing the Lafitte Greenway was just under $12 million. That investment spurred both public and private projects. These include the $20 million FEMA-funded Hagan-Lafitte Drainage Upgrade and Green Infrastructure project, and the $10 million ReFresh project, a healthy foods hub that brought Whole Foods and Liberty’s Kitchen to the Greenway. New business ventures, outdoor gyms, landscaping, bioswales and housing developments line the linear park, which Vorhoff said saw more use during the pandemic than ever before.

Coyle bought his Mid-City home in 2016, in large part because it sat seven blocks from the Greenway. He uses the Greenway daily, for biking, socializing and recreation.

“It’s central to everywhere that I need to go,” Coyle said.

“(The Lafitte Greenway) is an amazing transportation corridor, but also a gathering spot for a lot of people from different backgrounds and neighborhoods,” Centanni said. “I can tell the story of New Orleans by taking someone down the Greenway, from the French Quarter to Mid-City.”