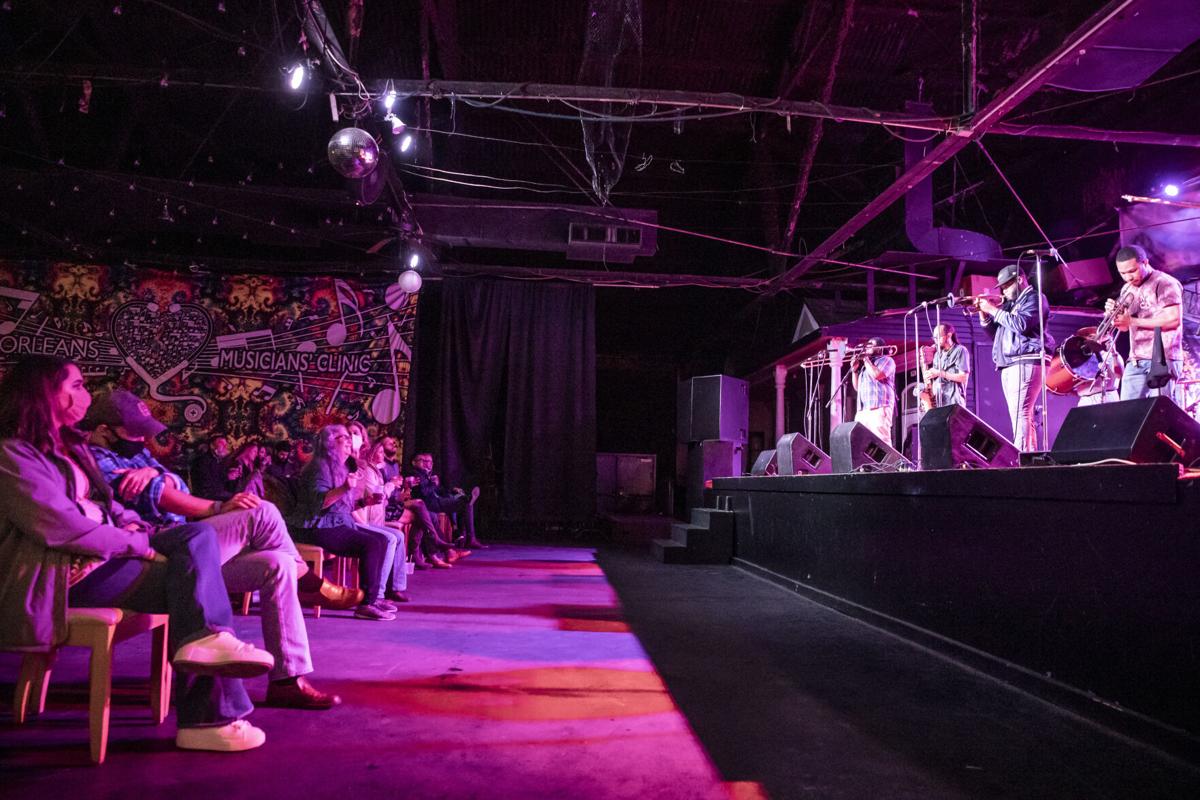 The Rebirth Brass Band performs for seated fans during the first open-to-the-public show in a year at the Howlin’ Wolf in New Orleans, Friday, March 19, 2021. 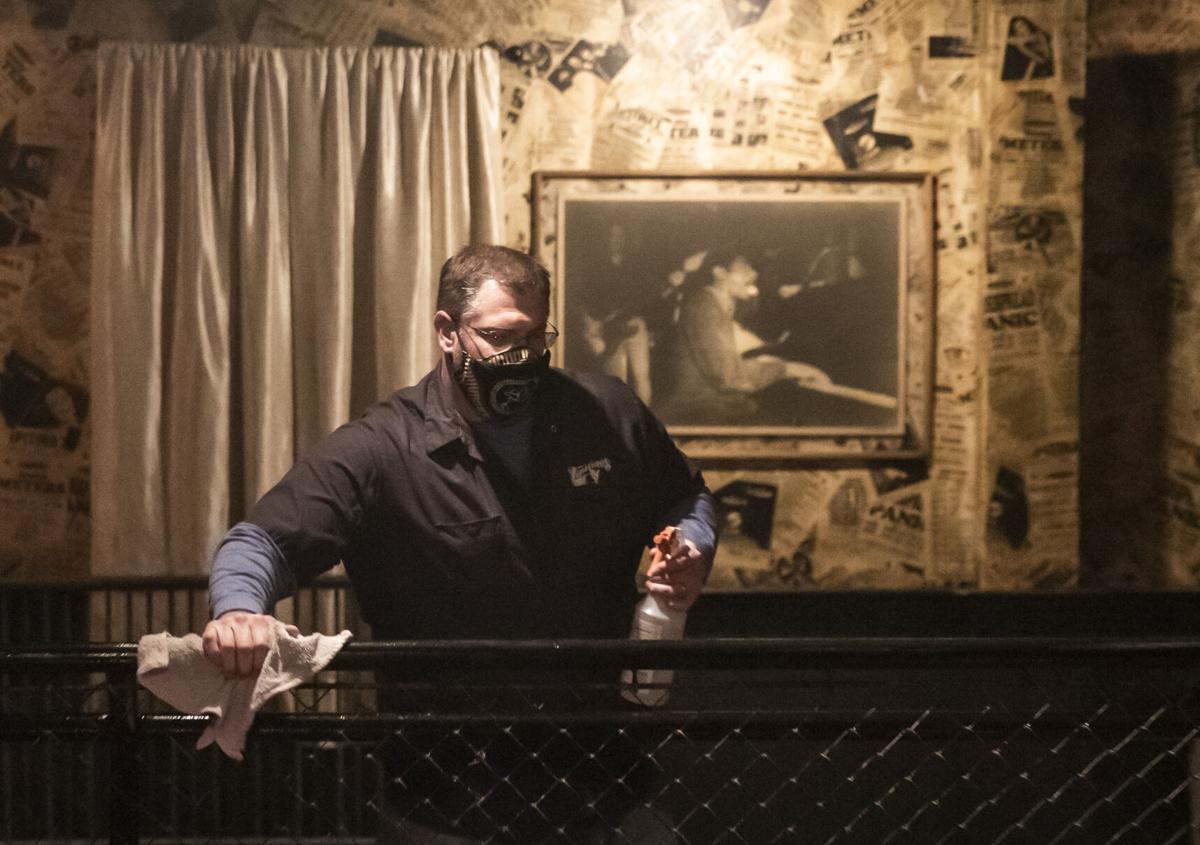 The Rebirth Brass Band performs for seated fans during the first open-to-the-public show in a year at the Howlin’ Wolf in New Orleans, Friday, March 19, 2021.

The Rebirth Brass Band, with snare drummer Jenard Andrews, center, performs for seated fans during the first open-to-the-public show in a year at the Howlin’ Wolf in New Orleans, Friday, March 19, 2021.

The Rebirth Brass Band’s first hometown show and the first open-to-the-public show in a year at the Howlin’ Wolf in New Orleans sold out, Friday, March 19, 2021.

People it at tablets before Ivan Neville performs during Tipitina’s first open-to-the-public show in a year in New Orleans, La., Friday, March 19, 2021. (Photo by Sophia Germer, NOLA.com, The Times-Picayune | The New Orleans Advocate)

A person dances in their chair as Ivan Neville performs during Tipitina’s first open-to-the-public show in a year in New Orleans, La., Friday, March 19, 2021. (Photo by Sophia Germer, NOLA.com, The Times-Picayune | The New Orleans Advocate)

People wait in line to get into Tipitina’s to see Ivan Neville perform during Tipitina’s first open-to-the-public show in a year in New Orleans, La., Friday, March 19, 2021. (Photo by Sophia Germer, NOLA.com, The Times-Picayune | The New Orleans Advocate)

People wait in line to get into Tipitina’s to see Ivan Neville perform during Tipitina’s first open-to-the-public show in a year in New Orleans, La., Friday, March 19, 2021. (Photo by Sophia Germer, NOLA.com, The Times-Picayune | The New Orleans Advocate)

Michelle Curtin squirmed in her front-row seat, trying not to dance, but it wasn’t easy. Steps away, the Rebirth Brass Band was cutting loose for its first hometown show – and the Howlin’ Wolf’s first show with an audience – in a year.

Curtin could barely contain herself. She moved to New Orleans to work on the 2011 movie “Green Lantern,” then stayed an extra eight years. She retired to Paradise, California, only to lose her home and marriage to the devastating Camp Fire in 2018. She returned to New Orleans, where music has been her medicine.

After a year of coronavirus lockdown, she was ready to have fun Friday night. When Howlin’ Wolf staffers informed her the city’s current coronavirus regulations prohibit dancing, she was incredulous.

“You’re going to have to get your handcuffs out,” she replied.

Throughout the week, Kaplan and Brian “Tank” Greenberg, the general manager of Tipitina’s, spoke dozens of times as they coordinated plans to adhere to public health regulations, including an 11 p.m. closing time.

“We don’t want to screw this up,” Greenberg said. “We want this to be the model for how everyone can go forward. Hopefully when they see we can do this right, they let us do more. I think it’s a good first step for sure.”

Each venue staged two shows Friday – Ivan Neville was featured at Tipitina’s – with attendance capped at 75 per show. Tickets sold out within hours, which wasn’t surprising: The normal capacity at Tipitina’s is 750, at the Wolf, 1,000.

Many fans are ready to hear music again. Banking on that, the Wolf plans to present Rebirth every Friday through May and the Hot 8 Brass Band every Sunday.

Tipitina’s isn’t being as ambitious yet. On Friday, ticketholders sat at socially distanced tables on the first floor and on stools along the second floor balcony. Servers took drink orders. Everyone had to remain seated and wear masks when not sipping.

The staff made numerous improvements during the club’s darkened pandemic year. Speaker stacks that flanked the stage have been replaced with smaller speakers hung from the rafters. The sound booth is gone, replaced by a portable sound and light control panel.

The beam with the basketball hoop that partially obstructed views from the balcony was removed.

A new sign hangs above the front entrance, and the exterior received a new coat of “Tipitina’s yellow” paint.And the club invested in an expensive new electric piano, which Neville played Friday.

The previous night, Galactic drummer and Tipitina’s co-owner Stanton Moore and his jazz trio performed a livestream concert with an audience of 40 or so invited guests. That, technically, was Tipitina’s first show with an audience.

But Neville on Friday was the first show open to the public. Minutes before the early set kicked off at 7 p.m., Galactic saxophonist Ben Ellman stood outside, processing his club’s tentative reopening.

Neville, 61, was a fitting choice for the grand return: like Tipitina’s itself, he is a COVID-19 survivor. He endured a bad bout with coronavirus early in the pandemic.

Now recovered, he was eager to perform for an audience again. He was also uneasy to be back on the stage he first played at age 17. He frequently sipped water to combat “nervous dry mouth.”

For 90 minutes, he explored his and his family’s extensive music catalogs, accompanied only by Devin Trusclair, the drummer in his band Dumpstaphunk.

The duo opened with the late local pianist Gerald “Professor Shorthair” Tillman’s apropos “Start It All Over Again.”

Twenty minutes later, Neville had warmed to the task. “This is kind of fun, man!”

He and Trusclair revived Neville’s decades-old “Same Old World,” funked up the Neville Brothers favorite “Mojo Hannah,” reinvented Professor Longhair’s “Go To the Mardi Gras” and navigated Jimmy Cliff’s “Sitting in Limbo,” a favorite of Ivan’s uncle, Art Neville. He even threw in a lovely cover of Fleetwood Mac’s “Landslide.”

“Ultimately, we didn’t have a sense of what to expect,” Toor said. The venue’s staffers were almost apologetic: “They knew they’re not giving us the normal Tipitina’s experience.”

They got a taste of it when Neville and Trusclair concluded with the Mardi Gras standard “Big Chief,” which tested audience’s members’ ability to remain seated.

“We’re trying to get back to what we used to do,” Neville said. Better days are ahead, “when we’re not scared to dance.”

Dancing was definitely verboten at the Howlin’ Wolf, where guests sat on hardback chairs.

The previous weekend, the Rebirth Brass Band traveled to Columbus, Ohio, to perform at a Tulane University graduate’s 50th birthday party. The band also played a public show at a club called Natalie’s. It started at 11:30 p.m., and patrons were allowed to stand and dance next to their seats.

“Last Friday in Columbus, Ohio,” Kaplan noted, “was funkier than this Friday in New Orleans.”

Rebirth did its best to remedy that. During the band’s 9:30 p.m. set, the music surged and swirled, waves of brass breaking atop the back line of tuba and bass drum as Jenard Andrews’ drumsticks skittered over his snare and cymbals.

Fans developed different techniques for seated “dancing,” including the lap slap, the alternating foot tap and the full-body wiggle. Some snuck in a strut or spin en route to the restroom or the bar.

“I can see some of y’all moving around, so I know you’re having a good time,” said trombonist Stafford Agee, who, after 30 years as a full-time professional musician, started selling cars to make ends meet during the pandemic. “There’s gonna come a better time, but we gonna do it like this for now.”

The bells of the musicians’ horns were covered with fabric. Given all the mitigation measures, “I’d feel safer in here without a mask than in any restaurant,” Kaplan said.

Kaplan, too, desperately wanted to dance: “How many times have I danced to Rebirth all over the world, and I can’t dance in my own club?”

A final Rebirth medley of “Feel Like Funkin’ It Up,” “Casanova” and “Do Whatcha Wanna” had fans straining to stay seated.

As the band concluded at 10:45 p.m., Kaplan thanked attendees for coming to “the most surreal first day back in the history of mankind.”

Trumpeter Glenn Hall confirmed that “it was a little weird. It was different, but it felt good to play anything. Hopefully the restrictions will go with the flow.”

Opening night, Kaplan said, “was a good first step, but we’ve got a long way to go until this is anywhere close to normal. Music is back, but not really back.”

Curtin, the front-row fan, was happy despite the restrictions. “To be locked up for the last year and then come out … it was a big release,” she said. “My Fitbit was going crazy, so I knew I was doing something.”

She cried at least twice – out of sadness for the musicians being out of work for so long, and out of joy for finally hearing them in person once again.

“I feel like a spring flower making my way out of the dirt, into the sunshine of the Rebirth Brass Band.”