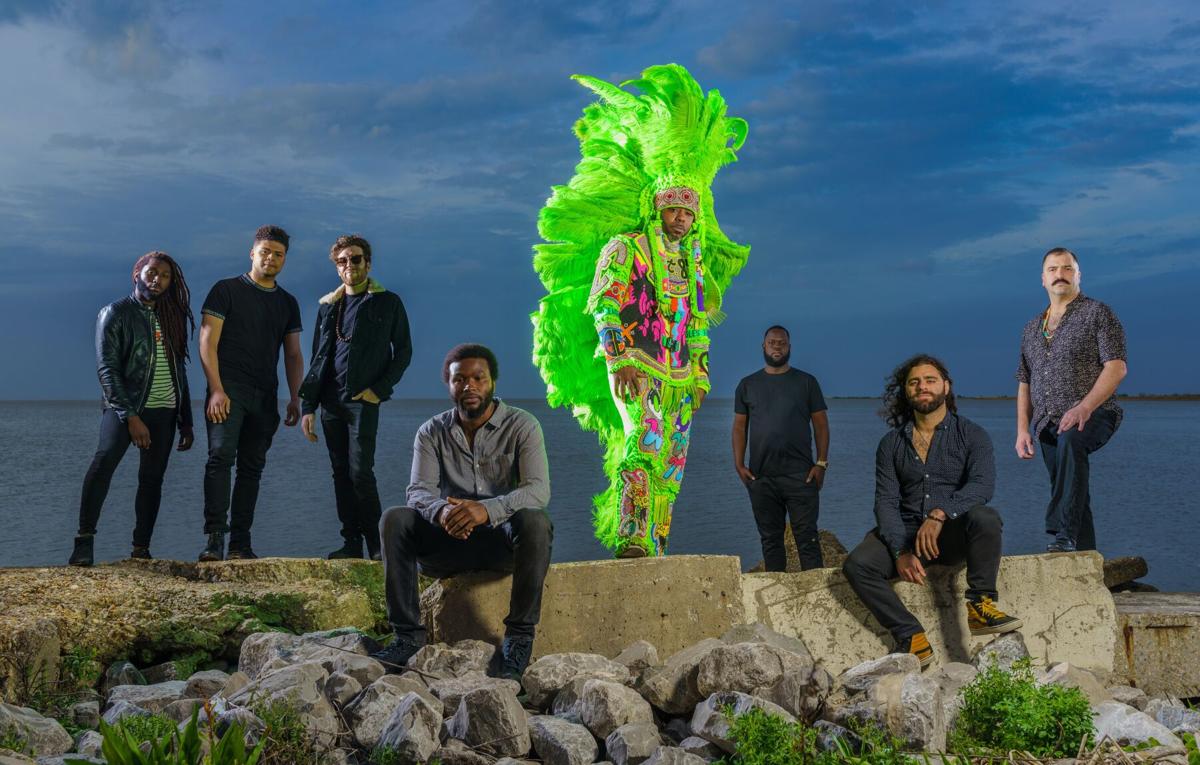 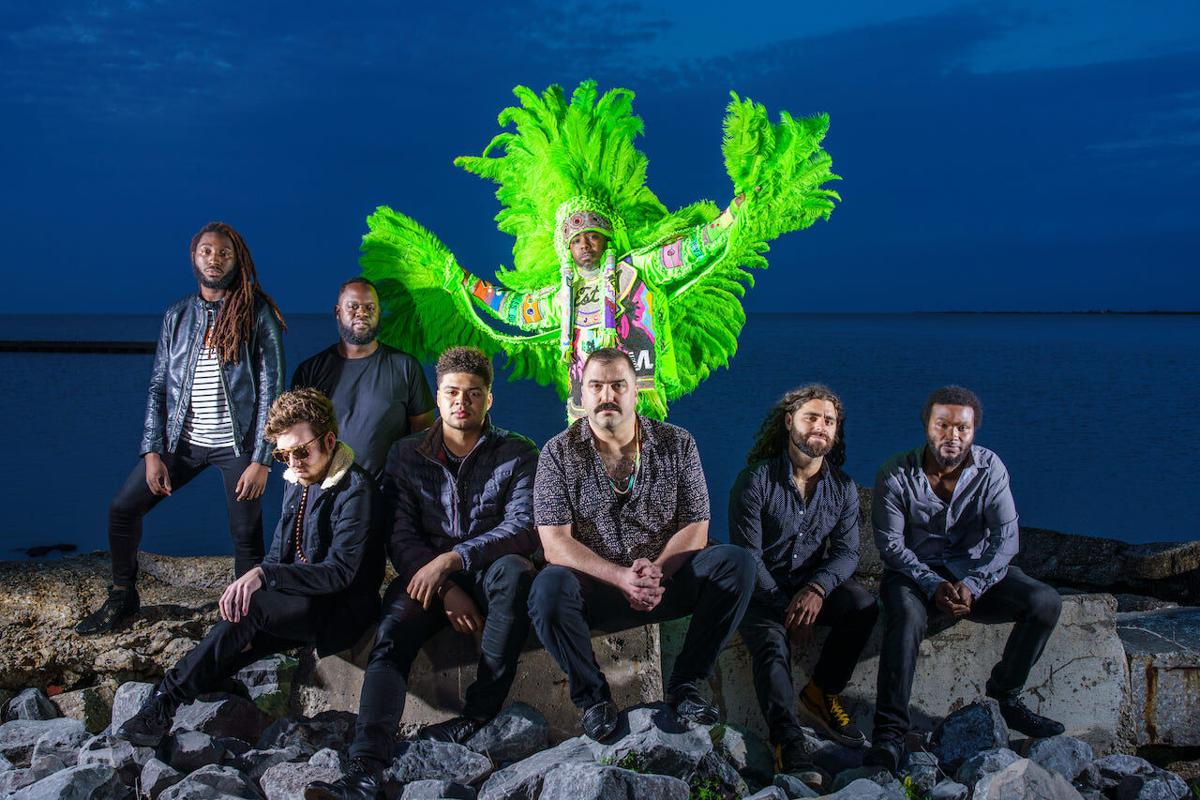 The New Orleans band Cha Wa, in a 2021 promotional photo.

But somewhere on the road during the summer of 2019, the members of Cha Wa became more than just an ensemble of New Orleans musicians. They became a band.

Trumpeter Aurélien Barnes lived the transition. He had joined Cha Wa the previous year for reasons more prosaic than poetic: the promise of paid gigs.

But as the eight musicians traveled to more than 100 shows that summer, “we shared a lot of experiences,” Barnes recalled this week. “Inside jokes, songs getting made in the van. It was really important.”

Want to hear music in New Orleans this weekend? There’s more than you might expect

By the end of the tour, Barnes had progressed from hired-gun horn player to key creative force, helping Cha Wa intertwine Mardi Gras Indian rhythms and chants, brass band horns, funk grooves and other strands of New Orleans music to create something both familiar and fresh.

As Cha Wa vocalist Joseph Boudreaux Jr., second chief of the Golden Eagles Mardi Gras Indian tribe, puts it, “We don’t want anyone to put us in one category. We want our own sound, based on our experiences.”

The band celebrates the new release this weekend at the Broadside, the outdoor venue next to the Broad Theater on North Broad Street. Saturday’s show is sold out. Tickets for a 6 p.m. Easter Sunday show are $15.

Cha Wa’s origin story traces back to the Berklee College of Music, where Rhode Island native Joe Gelini studied percussion. Along the way, he’d become enamored of New Orleans rhythms in general and those of the Mardi Gras Indians in particular.

After graduation, he moved to New Orleans and apprenticed with Mardi Gras Indian legend Monk Boudreaux. Gelini joined the latter-day incarnation of the Wild Magnolias, the band that introduced an electrified version of Mardi Gras Indian funk to the world in the early 1970s. He produced and played drums on the 2013 release “A New Kind of Funk,” the first Wild Magnolias album to feature the late great vocalist Bo Dollis’ son, Gerard “Bo Jr.” Dollis, as bandleader.

Since the outset, Gelini has been Cha Wa’s only constant as various musicians and singers cycled through the lineup. J’Wan Boudreaux, Monk Boudreaux’s grandson — and Joseph Boudreaux Jr.’s nephew — is prominently featured on the cover of Cha Wa’s Grammy-nominated 2018 album “Spyboy”; he and the band have since parted ways.

That roster represents a diverse cross-section of influences from New Orleans and beyond.

Boudreaux started touring alongside his father, Monk Boudreaux, in the Wild Magnolias at age 10; his first official gig was at the 1996 Summer Olympics in Atlanta.

Boudreaux was present during Cha Wa’s formative phase, but his primary allegiance at the time was to Monk’s band. He went all-in with Cha Wa in 2018 and is depicted on the cover of the new album. He takes a “compressed version” of his lime green 2020 Mardi Gras Indian suit on the road with Cha Wa.

Maize plays trombone with the hardworking TBC Brass Band. Teitel cut his teeth in his native Detroit but is now a New Orleans fixture; the funky electric guitar solo he stamps on the “My People” track “Wildman” taps into the sound of both cities.

Barnes is the son of zydeco and blues accordionist and harmonica player Bruce “Sunpie” Barnes. Aurélien plays washboard in his father’s band and has studied trumpet with a litany of local jazz greats. He also teaches French at a local grade school — his mother is French — and he is fluent in Spanish and Portuguese.

In 2019, the younger Barnes began masking with the North Side Skull & Bones Gang, which his father leads.

“I found a connection with Skull & Bones,” he said. “It just so happened that my dad is the chief. I wanted to learn more about it and have it in my cultural arsenal. I’m trying to get deeply immersed in the culture and bring it to the next generation.”

Barnes co-wrote the “My People” title track with Yanovski and sings it with Boudreaux. Barnes also conceptualized the song’s video. Much of it was shot in an old cemetery on the outskirts of New Orleans that, appropriately enough, includes an ancient Native American mound. The Skull & Bone Gang’s distinctive papier-mâché skull headpieces appear in the video, a reminder, said Barnes, that “no matter who you are, everybody is a skeleton underneath.”

Much of the “My People” album — which features guest turns by Anjelika “Jelly” Joseph on the soul workout “Love In Your Heart” and guitarist Alvin “Youngblood” Hart on a cover of Bob Dylan’s “Masters of War” — was conceived on the road.

Old-school New Orleans funk in the vein of the Meters and the Wild Magnolias is certainly an influence, “but in a way that allowed individual band members to put their own stamp on each song while staying in the Cha Wa vein,” Boudreaux said. “When you hear a Cha Wa album, you know it’s a Cha Wa album.”

The “My People” title track opens with percussion reminiscent of the Dixie Cups’ “Iko Iko,” augmented by a funky electric organ, brass swells and the combined voices of Barnes and Boudreaux. The “we’ll all be in the same boat” refrain was intended as a unifying anthem/reality check.

“Rich or poor, Black or White, Democrat or Republican, … it doesn’t matter,” said Boudreaux. “At the end of the day, we’re all in the same boat. Differences make us unique — they should not divide us.”

Barnes wanted it to be “a universal song that a lot of people can draw meaning from, but at the same time, there’s a specific message.

For Barnes, “My People” also carries an inherent environmental message. “If we don’t do something about the wetlands disappearing, we’re all going to be in the same boat, because there won’t be any land.”

The song was written and recorded before the coronavirus pandemic, but its resolve seems more relevant than ever.

“COVID is one of the things that let us know what ‘My People’ is trying to tell us — no matter who you are, you can be affected,” Boudreaux said. “We’re all human.”

Farmstand Live, a two-day, drive-in music and food fest, is slated for Shrine on Airline

Boudreaux also sees it as being especially relevant for people of color, singing, “My people, we’ve been left behind before.”

“We have experience being down, but also a lot of experience getting up, too,” he said. “We’re going to make it through this.”

Throughout the “My People” album, the disparate backgrounds, experiences and influences of the members come through — but so does their collective identity.

“We’ve come into our own identity as a group,” Barnes said, “and as individuals. What you hear is a big conglomeration of everybody’s ideas.”