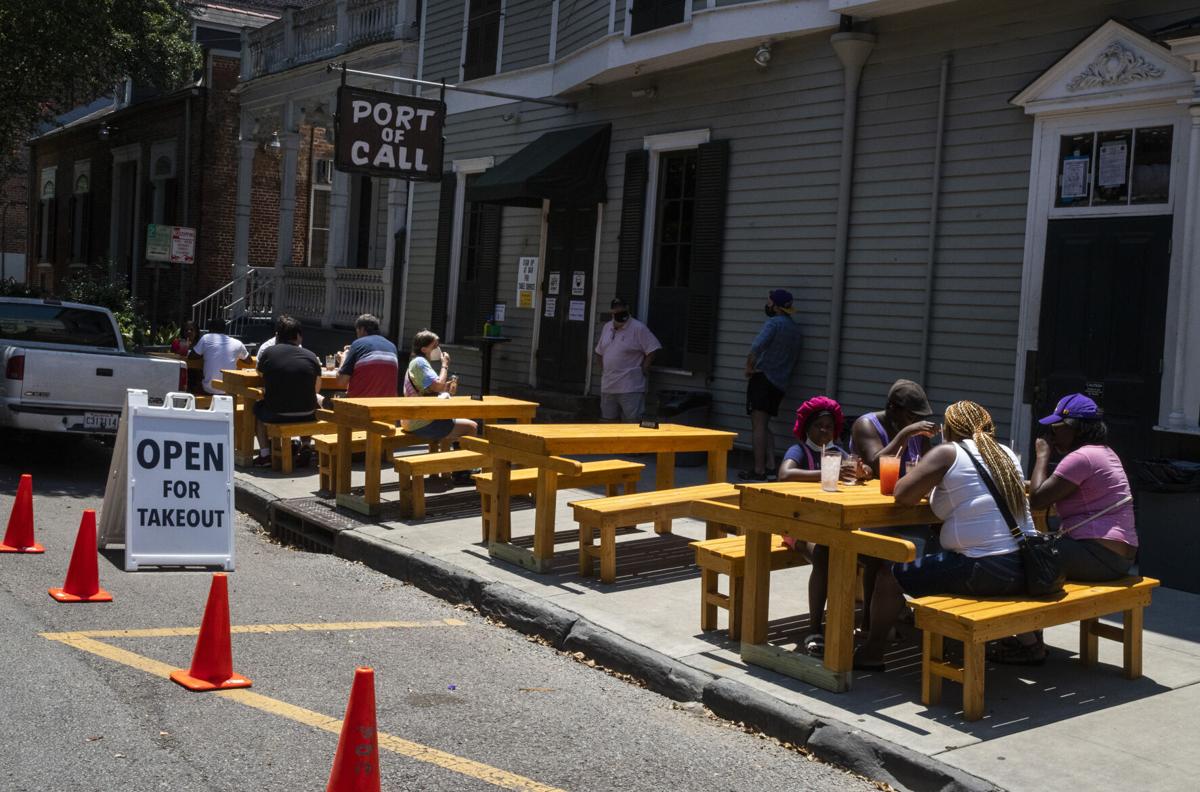 People dig into burgers at picnic tables set up outside Port of Call, back open now for the second time since the start of the coronavirus pandemic in New Orleans, Friday, Aug. 7, 2020. The French Quarter restaurant opened for outside seating and takeout. 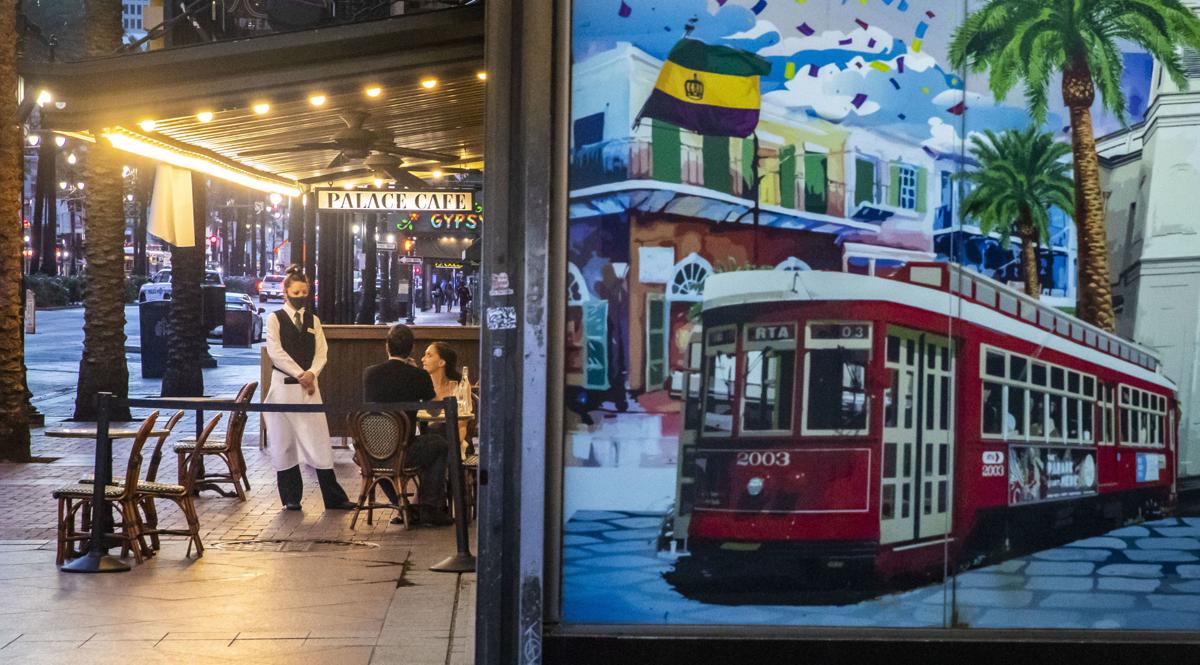 Avni Ozborcek, general manager of Tommy’s Cuisine, moves chairs to the sidewalk in order to gauge how many tables might fit in front of the restaurant. New Orleans Mayor LaToya Cantrell announced that restaurants can slowly begin to reopen as restrictions are eased during the coronavirus pandemic on Tuesday, May 12, 2020. 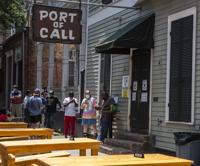 People await the opening of Port of Call for a second time since the start of the coronavirus pandemic in New Orleans, Friday, Aug. 7, 2020. The French Quarter restaurant is open for outside seating and takeout. 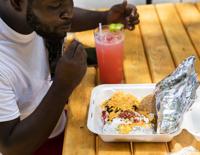 Timothy Sparrow sits at a picnic table to enjoy his burger during the second reopening of Port of Call since the start of the coronavirus pandemic in New Orleans, Friday, Aug. 7, 2020. The French Quarter restaurant is open for outside seating and takeout.

A customer picks up a to-go order at Lebanon’s Cafe on Carrollton Ave in New Orleans, Monday, April 27, 2020.  (Photo by David Grunfeld, NOLA.com, The Times-Picayune | The New Orleans Advocate)

Clancy’s Restaurant in New Orleans added outdoor tables by the sidewalk as part of its plan to reopen in the coronavirus pandemic.

New Orleans restaurants could soon have more tables on sidewalks, in tented parking lots and even in empty parking lanes officials hope to transform into “parklets” and “streateries” for open-air dining.

It all comes through a bundle of city programs and policies meant to help restaurants in the coronavirus crisis, though some facets could also permanently change the ways New Orleans restaurants operate outdoors.

Mayor LaToya Cantrell first sketched out the forthcoming programs on July 24, at the same time she announced tighter restrictions that effectively shut down New Orleans bars. The first measures are slated to begin next week, with more rolling out through August.

They arrive in the midst of the steamy summer, normally the worst time for al fresco anything in New Orleans. But these programs look beyond the weeks and even months ahead.

Jeff Schwartz, the city’s director of economic development, said the aim is to use the public right of way to help businesses immediately as they contend with the pandemic.

Public health officials say outdoor settings are safer for containing virus spread than indoors, which is why outdoor spaces have fewer restrictions in the coronavirus fight.

“We know we’ll be in this for an indefinite amount of time,” said Schwartz. “If we enable (restaurants) to set up more tables now, it might be the difference in helping them get through this.”

At the same time, Schwartz said the city is looking to the future and how to make the framework for businesses more versatile and pedestrian friendly.

“New Orleans knows how to be in the street and have community and commerce and celebration better than anywhere else,” he said. “This is about asking how do we use public space to support our business community, our residents, our culture bearers, not just for COVID times but for better times ahead.”

The city’s new plans are multi-faceted, and they will begin in different phases.

First up: a grant program to help restaurants augment sidewalks and off-street parking lots for service, like buying furniture, fans or sun shields. These grants would be up to $2,000 each, and available for 50 restaurants.

While that’s a small number of available grants, to qualify restaurants need to have permits to use sidewalk or parking lot spaces for dining. Schwartz said roughly 100 restaurants have such permits now. In May, the city waived fees and zoning restrictions on such uses to encourage outdoor service.

Grant applications will be available via a new website scheduled to launch next week.

A second program, slated to begin later this month, will turn parking lanes into “parklets” where restaurants can add tables.

The city will position water-filled street barriers around sections of the parking lane, and disable any related parking meters. From there, it will be up to the restaurants to outfit the newly designated parklets with tables and amenities for customers.

Schwartz said the city is now finalizing their selections for the first round of parklets. It will begin with about a half-dozen sites in business corridors that meet city criteria, with high business density and low traffic speeds. Schwartz said the city should be ready to announce locations and begin creating these by late August.

“We’re only doing this in areas where our public works and public safety people feel comfortable with the ability to do it safely,” he said.

Schwartz said these programs are all voluntary, and businesses can opt out.

“If a business doesn’t want this, even if that business is in a corridor where it’s happening, they can keep the parking spaces and nothing would change,” he said.

Brigtsen’s shows what changes, what endures as classic New Orleans restaurants fight on

The pilot program phase will last for perhaps a month. By the fall, the city hopes to expand the concept to more areas.

For a second phase of the parklet program, the city will make grants available to restaurants to help further develop these spaces with furnishings and amenities. These future grants would likely be for up to $6,000 each, Schwartz said.

This concept entails closing off traffic on small portions of selected streets, again in neighborhood business corridors, and then allowing restaurants to use the whole width of the street for outdoor seating. These streateries could span two to three blocks, in the manner of normal street closures for special events.

Unlike parklets, which are conceived as a permanent change, Schwartz said the city sees streateries as temporary, short-term additions to boost business in the crisis.

Restaurant operators have been eager to learn how the new programs will work, though some in the industry are leery of how City Hall will manage them.

“We’re interested in anything that’s going to help restaurants and bars, but we really need to see guidelines from the city,” said Stan Harris, president and CEO of the Louisiana Restaurant Association.

Information for restaurants has been scant thus far, he said. Some concerns are how sanitation and trash collection will work with the new framework, and if the city will seek to generate fee revenue from such programs in the future.

“These are all good ideas, but there are operational realities the restaurants have to deal with,” Harris said. “I’d be more engaged on it if the city had consulted with us beforehand. We would have put together a task force of our members. Now, we’ll end up working backwards.”

Many other cities have enacted new programs or relaxed regulations to encourage more outdoor dining. Schwartz said these plans have been slower to materialize in New Orleans because the city has been approaching them as long term additions to the permitting structure, rather than just an emergency response.

“The city went through the legwork at the front end,” he said. “We’re actually creating something that in 10 years restaurants could still be using.”

All of these programs are focused on restaurants for now. That’s a reflection of how important restaurants are in the city’s culture, Schwartz said, and how uniquely impacted the industry has been by the crisis.

However, Schwartz said the program could expand to other types of businesses that would benefit from outdoor service.

“If there’s not a health or safety concern, I don’t think there’s a reason why other businesses couldn’t participate in this in the future,” he said.

Keep fighting or close? For some New Orleans restaurants, reinvention shows another path