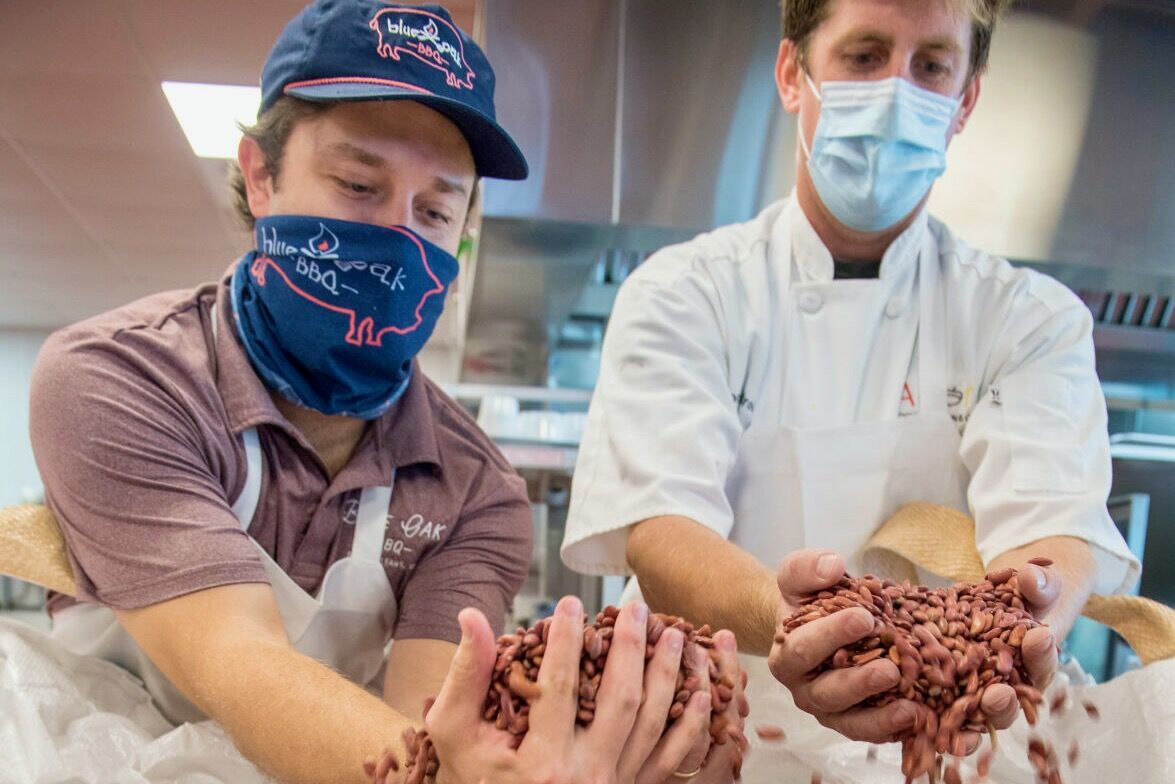 The Commissary chef Geordie Brower, right, and Philip Moseley, left, co-owner of Blue Oak BBQ, run their fingers through the one ton sack of red beans as they get ready to cook them on Tuesday, September 1, 2020 in New Orleans. Chefs and kitchen staff spent the day cooking the beans along with rice to feed those affected by Hurricane Laura in the Lake Charles area. (Photo by Chris Granger | The Times-Picayune | The New Orleans Advocate) 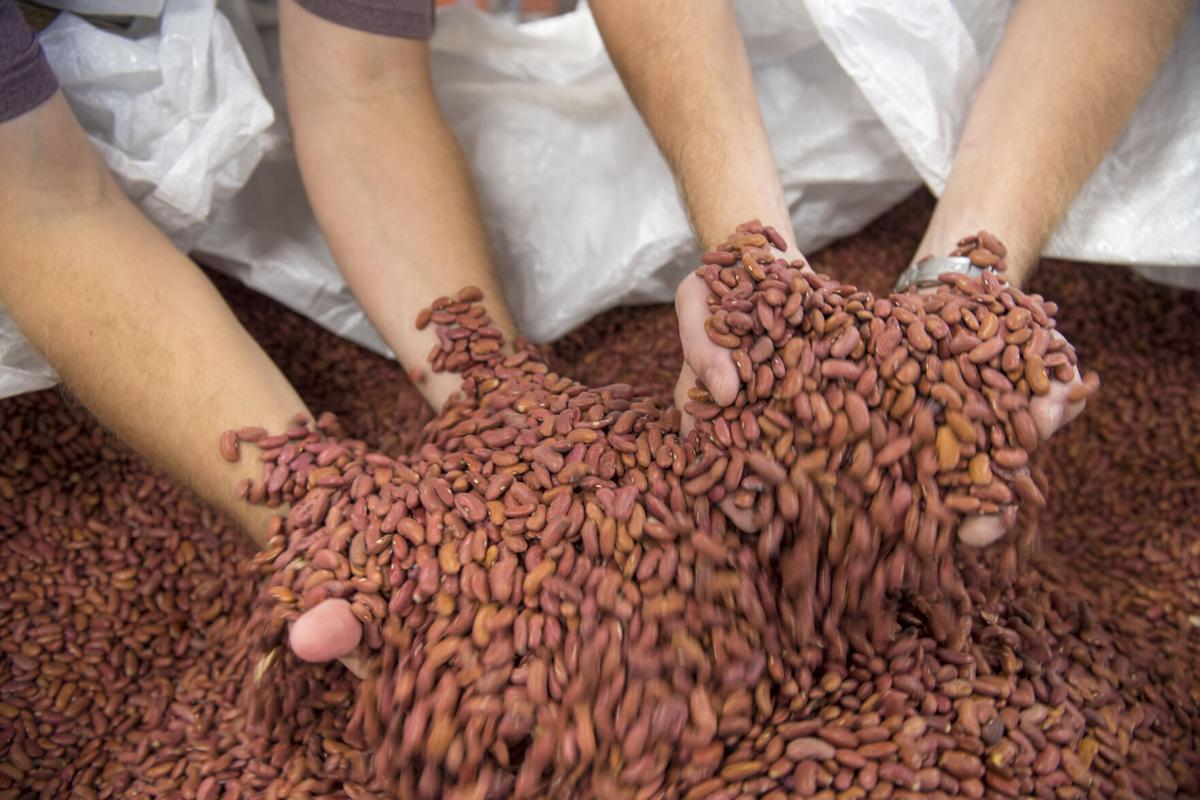 The Commissary chef Geordie Brower, right, and Philip Moseley, left, co-owner of Blue Oak BBQ, run their fingers through the one ton sack of red beans as they get ready to cook them on Tuesday, September 1, 2020 in New Orleans. Chefs and kitchen staff spent the day cooking the beans along with rice to feed those affected by Hurricane Laura in the Lake Charles area.

Thomas Lorio, 4, right, jumps into the air in order to get a better view of the one ton of red beans in a giant sack at the Commissary in New Orleans on Tuesday, September 1, 2020. Taylor Lorio, right, an inventory manager with the Commissary, brought his children, Thomas, and Charlie, 9 months, to see what one ton of red beans looks like. Staff of the kitchen were planning on cooking all the beans along with rice to serve Lake Charles residents affected by Hurricane Laura. 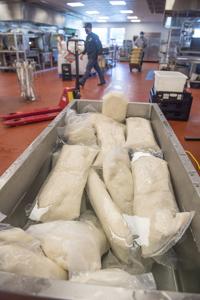 Bags of rice waiting to be shipped to the Lake Charles area to feed residents affected by Hurricane Laura. Staff of the Commissary, a commercial kitchen and market developed by Dickie Brennan & Co. in New Orleans, received one ton of beans that they planned on cooking most of the day on Tuesday, September 1, 2020. 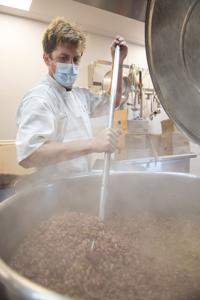 Chef Geordie Brower stirs one of the five containers filled with 60 gallons each of red beans intended to feed residents of the Lake Charles area affected by Hurricane Laura. Staff of the Commissary, a commercial kitchen and market developed by Dickie Brennan & Co. in New Orleans, received one ton of beans that they planned on cooking most of the day on Tuesday, September 1, 2020. 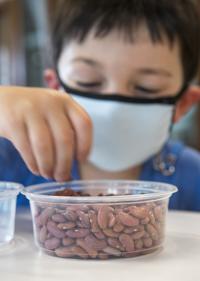 Thomas Lorio, 4, wanted to know just how many beans are in a one ton sack. Taking a small sample, weighing it, then counting its contents, Lorio and his father, Taylor, estimated you could lay the beans end-to-end and it stretch out for 14 miles. On Tuesday, September 1, 2020, staff of the Commissary in New Orleans cooked the beans to help those in the Lake Charles area affected by Hurricane Laura. 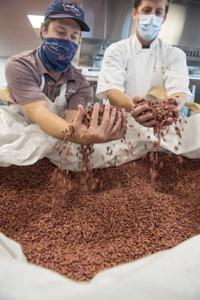 The Commissary chef Geordie Brower, right, and Philip Moseley, left, co-owner of Blue Oak BBQ, run their fingers through the one ton sack of red beans as they get ready to cook them on Tuesday, September 1, 2020 in New Orleans. Chefs and kitchen staff spent the day cooking the beans along with rice to feed those affected by Hurricane Laura in the Lake Charles area.

Amy Sins sized up the 1-ton canvas bin and the accompanying ton of rice alongside it. She knew it meant thousands of meals that her grassroots disaster relief group could bring people in Lake Charles coping with Hurricane Laura’s devastation.

But the kitchen her group normally uses at Second Harvest Food Bank was already stretched to capacity by the compounding needs of the pandemic and the hurricane.

Sins needed help, and she found it from a familiar source: New Orleans restaurants.

“It’s unbelievable, it actually gives me chills, just knowing how bad the restaurants have it right now and they’re still stepping up,” said Sins, founder of the group Flood & Disaster Outreach.

Hospitality businesses are often in the vanguard of disaster response, with the know-how and facilities to prepare large amounts of food quickly. Many of those businesses are now in peril as the coronavirus crisis continues into its sixth month, with bleak projections mounting for the future of the local industry.

And yet, people with skills, resources and networks built around New Orleans food are again rallying for others hard hit by the hurricane.

Sins’ truckload of red beans and rice is now being turned into disaster relief meals at the Commissary. This market and commercial kitchen was opened in the Lower Garden District last spring by the Dickie Brennan & Co. hospitality group to supply its own restaurants.

The facility is down to a skeleton staff, but the company still offered its services, equipment and storage for the task. Manager Sara Brennan said the Commissary is working at full tilt to prepare the red beans for shipment Thursday.

“You just think about (Hurricane) Katrina and what everyone did for us, it’s instinctual,” said Geordie Brower, a chef with Dickie Brennan & Co. “We don’t have a lot of staff right now, but we can still cook.”

He put out a call to friends in the business and soon Blue Oak BBQ proprietors Phil Moseley and Ronnie Evans were there, sealing up bags of finished product that can be quickly heated to serve in makeshift front line kitchens.

Sins said this kind of response has swiftly accelerated her group’s efforts, as restaurant people have volunteered to collect bottled water, offered supplies and logistical support, and started cooking.

“There are chefs whose restaurants aren’t even open and they’re here helping,” she said. “I just feel like it’s in the heart and soul of our community to do this.”

She’s kept her Holy Cross neighborhood Creole restaurant closed, with tourist business absent and many of her older regulars no longer dining out in the pandemic.

But she’s kept the stoves lit and some staff working by preparing food for community feeding efforts. That now includes meals that Flood & Disaster Outreach will bring to Lake Charles. It’s work that hits close to home for Henry.

“I grew up in Lake Charles, so this is near and dear to me,” Henry said. “New Orleans knows how it feels to be in a situation like that. I think we have a lot of heart and sensitivity to it. We know what it means for others to embrace and support you.”

Other groups that coalesce around food have been revving up their own responses since the storm hit, including barbecue teams that annually compete in the charity cook-off Hogs for the Cause. For instance, members of Deswine Intervention, a team formed around the men’s club from the Uptown school Holy Name of Jesus, trucked out to southwest Louisiana over the weekend. They’re now cooking up kettles of comfort food at small towns en route to Lake Charles.

Hogs ResQue, a nonprofit formed by Hogs for the Cause team leaders, begins a supply drive with the Junior League of New Orleans this week (see details at resque.org) and plans to start cooking around Lake Charles communities next week.

For the nonprofit Gulf Coast Disaster Relief, Laura response started with “pasta parties” for people to precook huge batches of spaghetti and macaroni, and “chopping parities” to prep vegetables.

Soon, co-founder Tammy Larson started sending out more specific requests for foil pans, condiments and the 700 cookies her group will add to dinner plates when they start feeding people in Lake Charles this weekend.

“It is like a family effort,” said Larson. “We’ve become this network, so that when something happens, the ball starts rolling and there’s no stopping it.”

Like Sins’ group, this organization formed during the 2016 floods in Baton Rouge. Offering different ways for people to contribute has added to the group’s durability during the coronavirus crisis, Larson said.

“Right now, people don’t have a lot of extra cash to give; they’re out of work or their jobs have been impacted. But if you give someone a specific task they can accomplish, they do it,” she said.

For New Orleans chef Chris “Shaggy” Davis, that means rolling out the mobile kitchens he normally uses for his NOLA Crawfish King catering business. With many events sidelined in the pandemic, he’s now in the process of building a new market and takeout shop in Gentilly. But this week, he’ll step away from that project to cook with Gulf Coast Disaster Relief.

“When you have the abilities and the tools and you see people in need, you have to do it,” Davis said.

Urologist: This May Shrink An Enlarged Prostate – Try It TonightSponsored | World Health Wellness 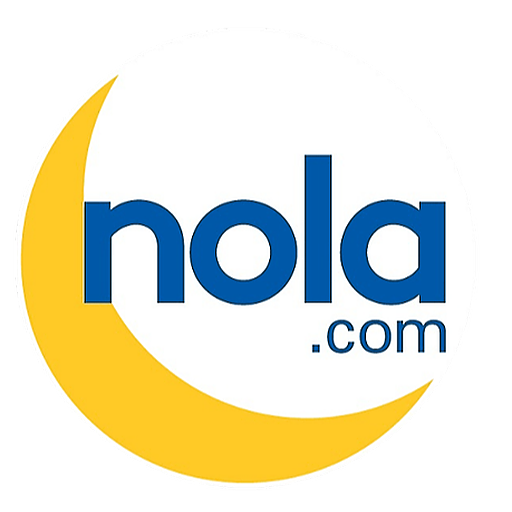 Entertaining tour of the Garden District

We were thinking of doing our own self guided walking tour in the Garden District-SO glad we changed our minds. Our knowledgable and local guide, David made our tour so much more interesting with his insights and humor.

That time Allen Toussaint and The Meters cut a Blaxploitation soundtrack

The tour representative, Robert, was very accommodating and rescheduled the tour for the next day, insuring we had a very memorable experience!

That time Bob Saget sang 'My Generation' onstage with the Revivalists: 'He killed it'