How a Creole takeout window grew to a new Gentilly seafood restaurant. ‘It’s our culture’ 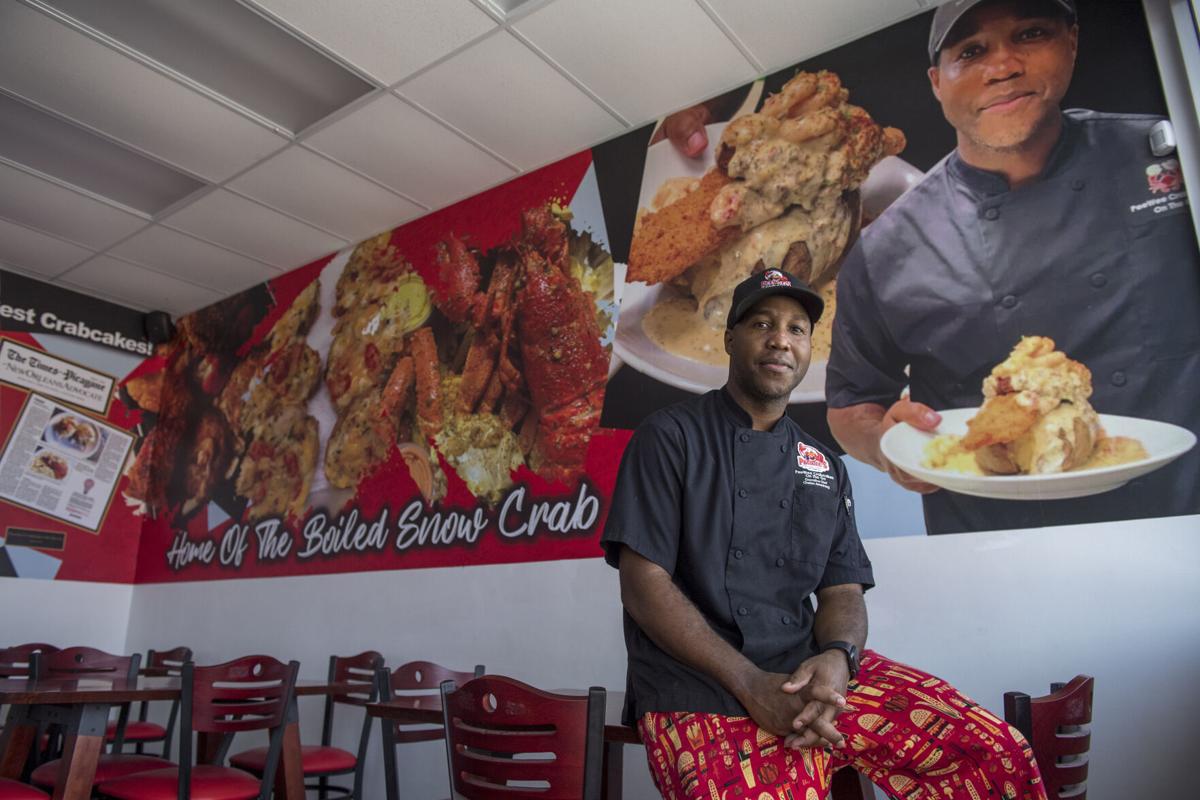 Charles Armstrong, owner of PeeWee’s Crabcakes, at his new restaurant on 4500 Old Gentilly Road in New Orleans on Tuesday, September 1, 2020. (Photo by Chris Granger | The Times-Picayune | The New Orleans Advocate) 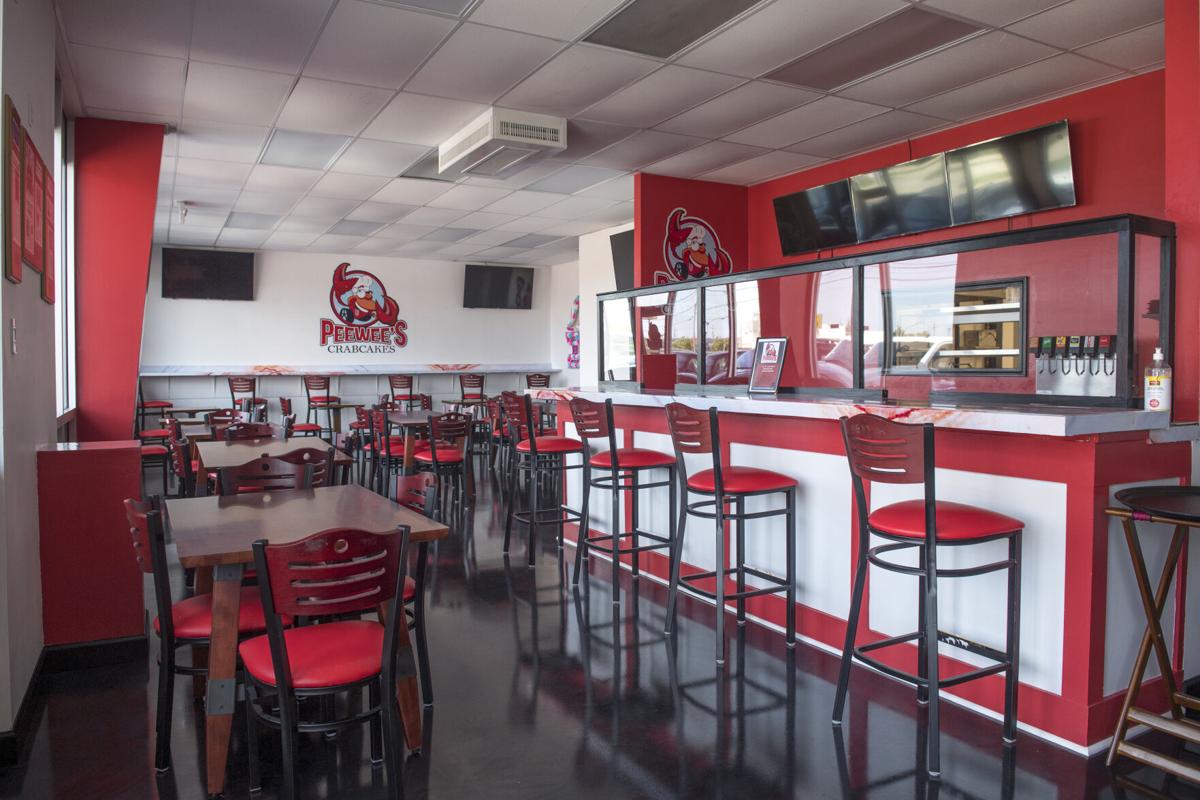 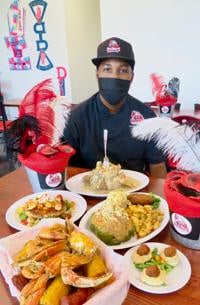 Charles “PeeWee” Armstrong developed his restaurant PeeWee’s Crabcakes with his own take on New Orleans seafood traditions. Emblems from his social aid and pleasure club hang on the wall behind him.

The seafood potato is twice baked, stuffed with crawfish tails and cream sauce and topped with fried fish and a crabcake at PeeWee’s Crabcakes in Gentilly. 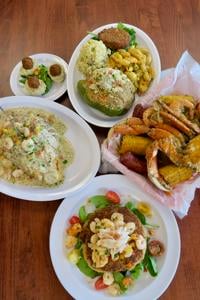 A spread of dishes at PeeWee’s Crabcakes in Gentilly, including the seafood potato, deviled eggs with crabcakes, the knockout stuffed bell pepper plate, boiled crab leg clusters and a signature crabcake. 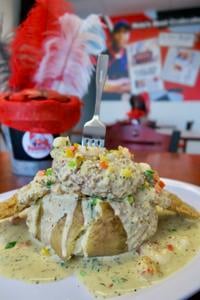 The seafood potato is twice baked, stuffed with crawfish tails and cream sauce and topped with fried fish and a crabcake at PeeWee’s Crabcakes in Gentilly.

A spread of dishes at PeeWee’s Crabcakes in Gentilly, including (clockwise from top) boiled crab leg clusters, the signature crabcake, the seafood potato, deviled eggs with crabcakes and the knockout stuffed bell pepper plate.

The knockout stuffed bell pepper plate is finished with a crabcake, seafood mac and cheese and potato salad at PeeWee’s Crabcakes in Gentilly.

The dish that started it all: the signature crabcake, topped with shrimp and crabmeat at PeeWee’s Crabcakes in Gentilly. The restaurant began in a home kitchen, evolved into a takeout shop and added a dine-in restaurant in 2020. 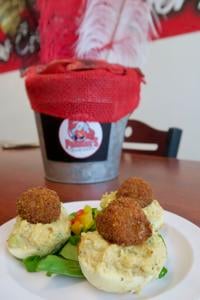 The logo at PeeWee’s Crabcakes adorns the counter at the new Gentilly restaurant.

Charles Armstrong, owner of PeeWee’s Crabcakes, hung some of his second line club suit on the wall of his new restaurant on 4500 Old Gentilly Road in New Orleans on Tuesday, September 1, 2020. (Photo by Chris Granger | The Times-Picayune | The New Orleans Advocate)

Sometimes people tell Charles “PeeWee” Armstrong that he’s built something from nothing. But he doesn’t see it that way at all.

True, he did start PeeWee’s Crabcakes delivering plates he cooked in his Central City apartment, and his first real location was a takeout window hidden in a bakery. He didn’t have family money behind him and he didn’t have an investor, much less a loan.

But Armstrong is emphatic that he came to the restaurant business with something invaluable.

“It’s our culture,” he said. “It’s not just money. I had to make money to make this happen. But I had the love, the passion, the vision of New Orleans. That’s where this is coming from.”

The way Armstrong has tapped and interpreted that culture now plays out across his greatly expanded new PeeWee’s Crabcakes location in Gentilly. It officially opened Tuesday (Sept. 8).

It’s a counter service, dine-in restaurant that represents a big step up from Armstrong’s original takeout restaurant, PeeWee’s Crabcakes on the Go, which he continues to operate in Central City.

He’s also fitting out a food truck, which is due to hit the streets later this month, to bring a mobile version of his menu to more parts of town.

That menu is a robust romp through New Orleans flavor, a modern rendition of local seafood traditions told through crabcake plates, seafood pasta dishes, stuffed fish and combination platters and family-sized pans that look like holiday feasts all on their own.

Armstrong’s signature dishes always have a lot going on — like deviled eggs topped with mini crabcakes, shrimp and broccoli with catfish — though his flavors feel entwined, rather than piled up.

Armstrong is part of the next generation of Black New Orleans chefs making their mark in the city’s culinary scene.

But he said whatever he does starts with the traditions his hometown gave him, rather than where he’s taking them.

“I love to cook, yes, but it’s the culture that gives me my style and identity and makes it mean something,” he said.

Taking it from the street

Armstrong grew up in Central City in a family with an ingrained love of New Orleans food. His parents worked as cooks at the Marriott hotel, and the kitchen in their apartment could feel like a family-style cooking competition.

“It was always who could make the darkest roux, who made the best beans,” Armstrong recalled.

He’s worked in restaurants since he was a teenager, starting with the company led by the late legendary Al Copeland. It made a lasting impact.

“You look at the great restaurants and chefs — Al Copeland, Emeril Lagasse, Paul Prudhomme — their menus always were about the culture of New Orleans,” he said.

He took other cues from the city’s Black street culture. The chef, now 38, has since age three paraded with the Devastation Social Aid and Pleasure Club. He grew up with the street processions, the lushly detailed handmade sashes and suits and parasols, the swirl of music, and an understanding of what it takes to make these joyous experiences possible.

“People don’t see the work that goes into them, but they see the result,” Armstrong said. “Everything has to fit. All the feathers and the stones, every curve. It’s the same way in my kitchen now. All the ingredients, the flavors, it all has to fit.”

To build his business, Armstrong started with crabcakes, still his signature dish. Creamy-rich and butter crisp, they’re finished with a sweet-spicy sauce named for his daughter Asya.

He started cooking them at home, delivering plates himself. By 2018, this evolved into his takeout shop, initially sharing a bargeboard cottage on Martin Luther King Boulevard with a donut shop run by his brother.

Armstrong tried out a pop-up arrangement in the Central Business District, but soon returned to the same Central City spot, this time taking over the whole cottage. He gradually polished its rough edges into a colorful red exclamation point on the boulevard, always busy with people picking up orders.

His menu has grown constantly.

Pasta with crab sauce and asparagus and crabcakes on top. Old fashioned stuffed hard-shell crabs, the type you don’t see too often outside of people’s homes now. Stuffed potatoes with cheesy cream sauce and fried fish. Seafood from other lands that are popular here, like blackened salmon and stuffed lobster tails. On it goes through wings and loaded fries, po-boys and wraps, salads and char-grilled oysters.

The menu is very large, but Armstrong has confidence in his system, which he’s brought to Gentilly. That system has let him field hundreds of orders a day from his takeout window, and that has allowed him to build up the money to expand.

“You have to recognize that’s not your money, that’s your restaurant’s money. Do you want to grow? Then that money belongs to the restaurant,” he said.

At the new restaurant, the walls are covered with images of the chef and his food. Emblems from his parade club hang on the wall, tables have centerpieces festooned with feathers and brass band music plays on the sound system. The restaurant serves soft drinks only (no alcohol), and has a kids menu printed with shapes for coloring.

Expansion plans were in the works before the pandemic arrived, radically reshuffling the stakes for New Orleans restaurants.

But business has remained steady in Central City, and the momentum he feels is behind him now propelled the new restaurant’s progress.

He looked at many different locations first. He knew the restaurant had to fit in its neighborhood as well as any ingredients in his recipes.

“Gentilly made sense, the soul of Gentilly, the culture of Gentilly,” he said. “You put us together, we’re going to make some magic here.”