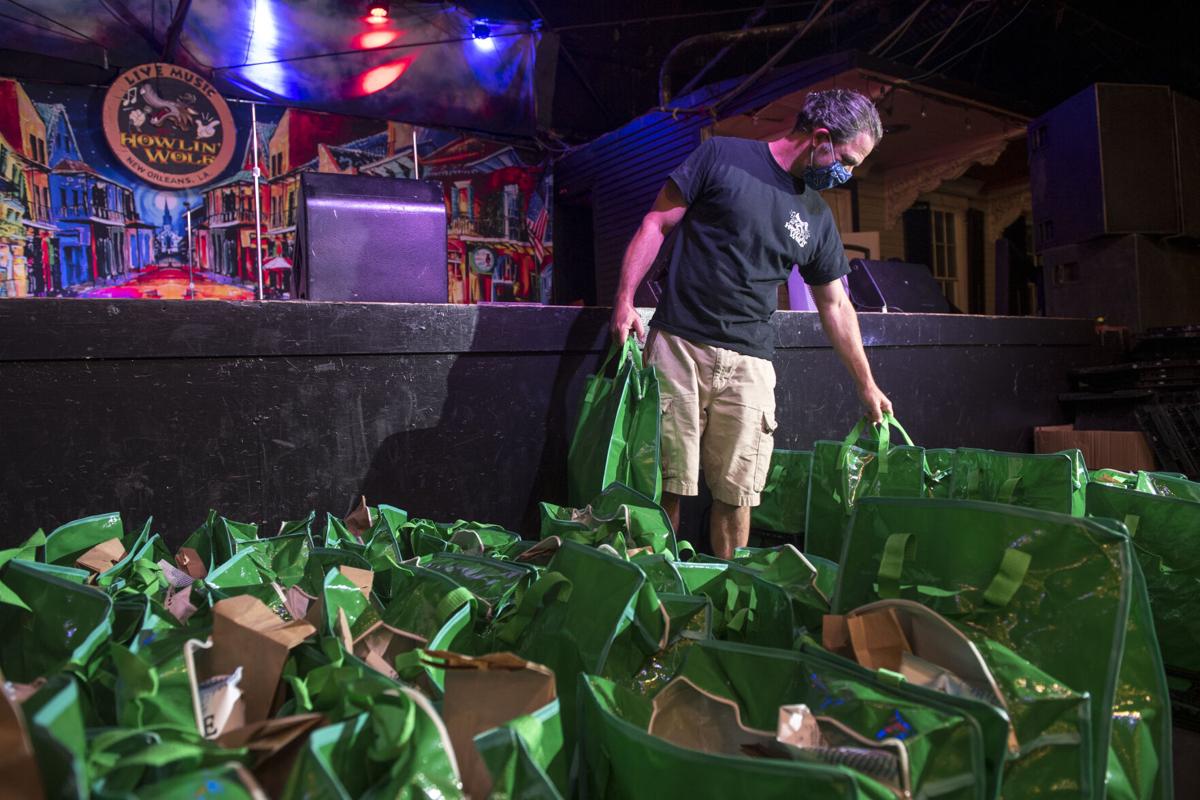 Howie Kaplan, owner of the Howlin’ Wolf, has transformed his venue into a feeding hub for musicians, hospitality workers and first responders through its Meals for Musicians program. Photographed on Wednesday, August 19, 2020. 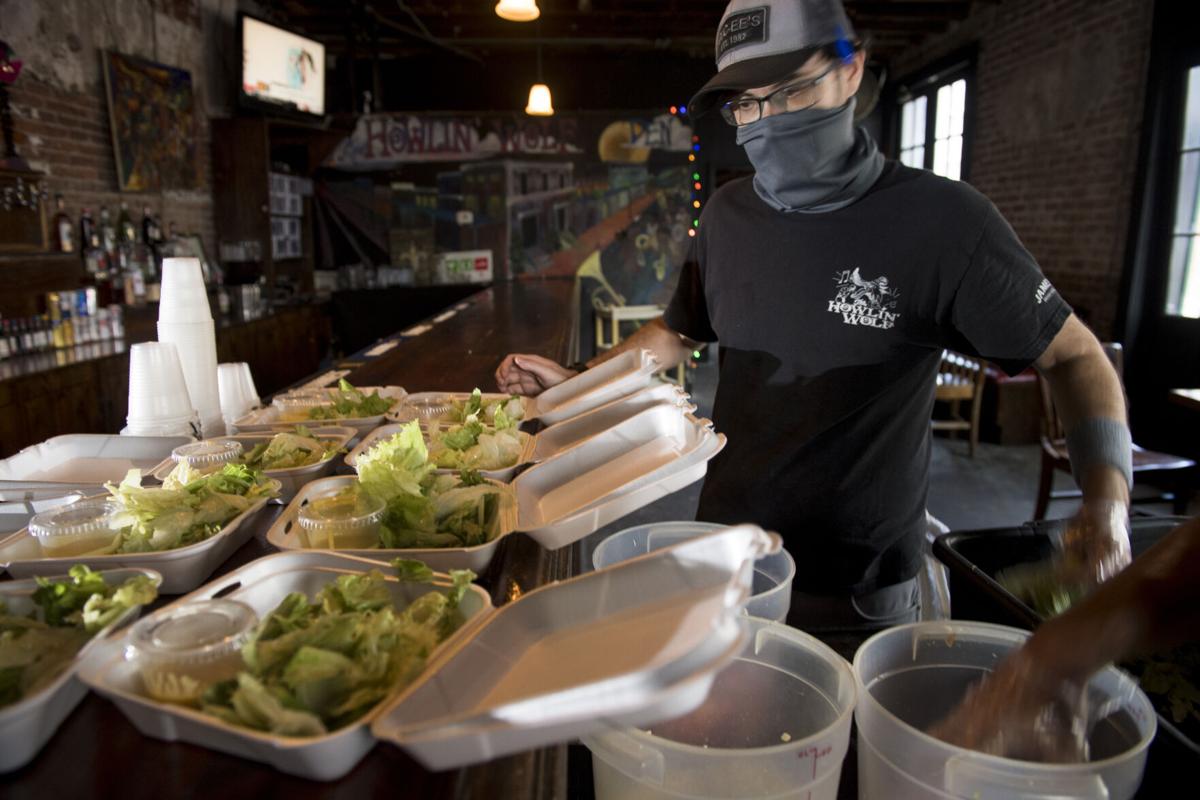 The Howlin’ Wolf’s Stu Schayot prepares meals. The venue has been transformed into a feeding hub for musicians, hospitality workers and first responders through its Meals for Musicians program. The Wolf also serves as a distribution center for other relief organizations. Photographed on Wednesday, August 19, 2020.

Howie Kaplan, left, owner of the Howlin’ Wolf, with Cliff Doescher, center. The venue has been transformed into a feeding hub for musicians, hospitality workers and first responders through its Meals for Musicians program. The Wolf serves as a distribution center for other relief organizations. Photographed on Wednesday, August 19, 2020. 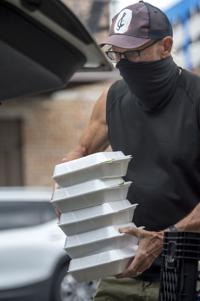 Volunteer Cliff Doescher loads up his car with meals to feed 10 people as part of the Howlin’ Wolf’s Meals for Musicians program on Wednesday, August 19, 2020. 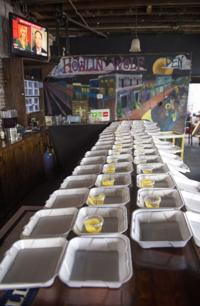 The Warehouse District music venue the Howlin’ Wolf has been transformed into a feeding hub for musicians, hospitality workers and first responders through its Meals for Musicians program.Photographed on Wednesday, August 19, 2020.

Stacey Morigeau, right, follows volunteer Eric Booth out of the Howlin’ Wolf.  The venue has been transformed into a feeding hub for musicians, hospitality workers and first responders through its Meals for Musicians program. The Wolf serves as a distribution center for other relief organizations. Photographed on Wednesday, August 19, 2020.

Ethan Shorter of Bywater Bakery helps prepare meals at the Howlin’ Wolf for its Meals For Musicians program. The venue has been transformed into a feeding hub for musicians, hospitality workers and first responders. Photographed on Wednesday, August 19, 2020.

The Warehouse District music venue the Howlin’ Wolf has been transformed into a feeding hub for musicians, hospitality workers and first responders through its Meals for Musicians program. Volunteers load up meals for delivery on Wednesday, August 19, 2020.

In the early days of the coronavirus pandemic, Howie Kaplan, proprietor of Warehouse District entertainment venue the Howlin’ Wolf, thought back to the immediate aftermath of Hurricane Katrina.

He recalled how the owners of Drago’s restaurant set up a makeshift kitchen in a Fat City parking lot to serve food to anyone who needed it.

Thus inspired, Kaplan launched Meals For Musicians, a program to provide free lunches for musicians and other culture bearers and service industry employees. From noon to 2 p.m. on Mondays, Wednesdays and Fridays, the Howlin’ Wolf distributes a total of more than 700 free lunches weekly.

As a result, the Wolf is often abuzz with activity, albeit during the day instead of after dark.

Kaplan would prefer to be talking about music, rather than meals. Oct. 1 marks the 20th anniversary of his purchase of the Howlin’ Wolf. Not having a big anniversary blowout that night will be “depressing,” he said. “This would have been my best year.”

The venue’s 2020 calendar had been filled with not just concerts, but a slew of corporate and other private events. The Wolf’s annual Jazz Fest concert series was selling faster than it had in years, with several sellouts in the making.

“March, April and May were going to be my biggest three months ever,” said Kaplan, who also manages several local bands. “It was all looking up.”

Instead, the Wolf has been silent since March 15, when the Hot 8 Brass Band played its regular Sunday night show to a mostly empty room. The venue had sold more than 80 advance tickets, Kaplan said; only two people showed up to redeem them.

Since then, his focus has shifted to Meals for Musicians.

The program is not limited to musicians. It is open to all “culture bearers,” which in the broadest sense ranges from sous chefs to Uber drivers. Not surprisingly, there was an uptick in need after the federal government’s $600 supplemental unemployment benefit ran out this summer.

The operation has expanded as other organizations have gotten involved, including World Central Kitchen and Culture Aid NOLA, a food distribution nonprofit established by disaster management professional Erica Chomsky Adelson.

The New Orleans Musicians Clinic and Assistance Fund helps underwrite the program through its community health platform. The Musicians’ Clinic also arranged for Meals For Musicians to deliver food to dozens of its elderly and medically compromised clients.

“We recognize that food access remains difficult for our patients, both because they reside in food deserts and have lost their main source of revenue, with no end in sight,” the Musicians Clinic’s Erica Dudas said. “They greatly need our support.”

Participants also receive a weekly call from the clinic’s community health advocate, Jamilah Peters-Muhammad, who checks in on their emotional and physical well-being.

“We are focused on making this program about dignity, respect and creating a little bit of joy and connection during this dark time,” Dudas said. “It is a lifeline.”

Separate from the philanthropic operation, The Den, the Howlin’ Wolf’s adjacent venue at the corner of South Peters and St. Joseph, is open daily for lunch and dinner service, operating with a restaurant permit and offering dine-in and delivery options.

Early on, he funded Meals for Musicians out of his pocket. A GoFundMe campaign, in-kind donations of food — sometimes from restaurants clearing out their coolers after having to shut down, sometimes from other aid groups — and private monetary donations have all helped.

“For $1 or $2, you can give somebody a good meal,” Kaplan said. Packaging for those meals is the biggest expense.

Efficiency is key. The operation’s tight budget, Dudas said, is “organized on principals of disaster management and longevity.”

Meals For Musicians works with whatever comes in, whether it’s 1,200 pounds of frozen whole chickens or dozens of cases of peanut butter. “Nothing goes to waste,” Kaplan said. “It’s easy to take it and adapt to it.”

The varied menu has included such dishes as roasted chicken, red lentils, black beans and a jalapeño and cheddar oatmeal. Meals are served cold, to be heated at home.

It is very much a community effort. Bywater Bakery, Trinity Episcopal Church, French Truck Coffee, Camellia Brand, New Orleans Fish House, Nirvana Indian Cuisine, Leidenheimer bakery and other entities have contributed. A crew of 10 or so volunteer drivers delivers the care packages to the stay-at-home clients.

Kaplan cites the Hebrew concept of “tzedakah,” the ethical requirement to assist others in need, as a motivation.

“That’s how I was raised,” he said. “It was easy to make this an extension of what we do. It’s been an interesting journey. We’re going to keep it going as long as we can.”

Commander’s Palace reopens this week, and the New Orleans classic is making some changes

“It’s nice we get to be part of something that helps people,” Kaplan said. “But it’s also self-serving: I’ve got a big empty room without musicians and fans. Without musicians, none of this other stuff happens. I worry about the musicians.”

He fields frequent calls and emails asking when the Howlin’ Wolf will start presenting live music again. Shouting, singing and dancing in music clubs still seems a ways off. Kaplan, who is also involved with Save Our Stages and other groups lobbying Congress to assist independent music venues, hopes for “some semblance of normal” by spring 2021. “I think that’s the reality.”

Meanwhile, his Howlin’ Wolf 20th anniversary in October “will be bittersweet without any bands.”

Donations to Meals For Musicians can be made through the Musicians’ Clinic, online at neworleansmusiciansclinic.org/donate or by mail to 1525 Louisiana Ave., New Orleans, LA, 70115.