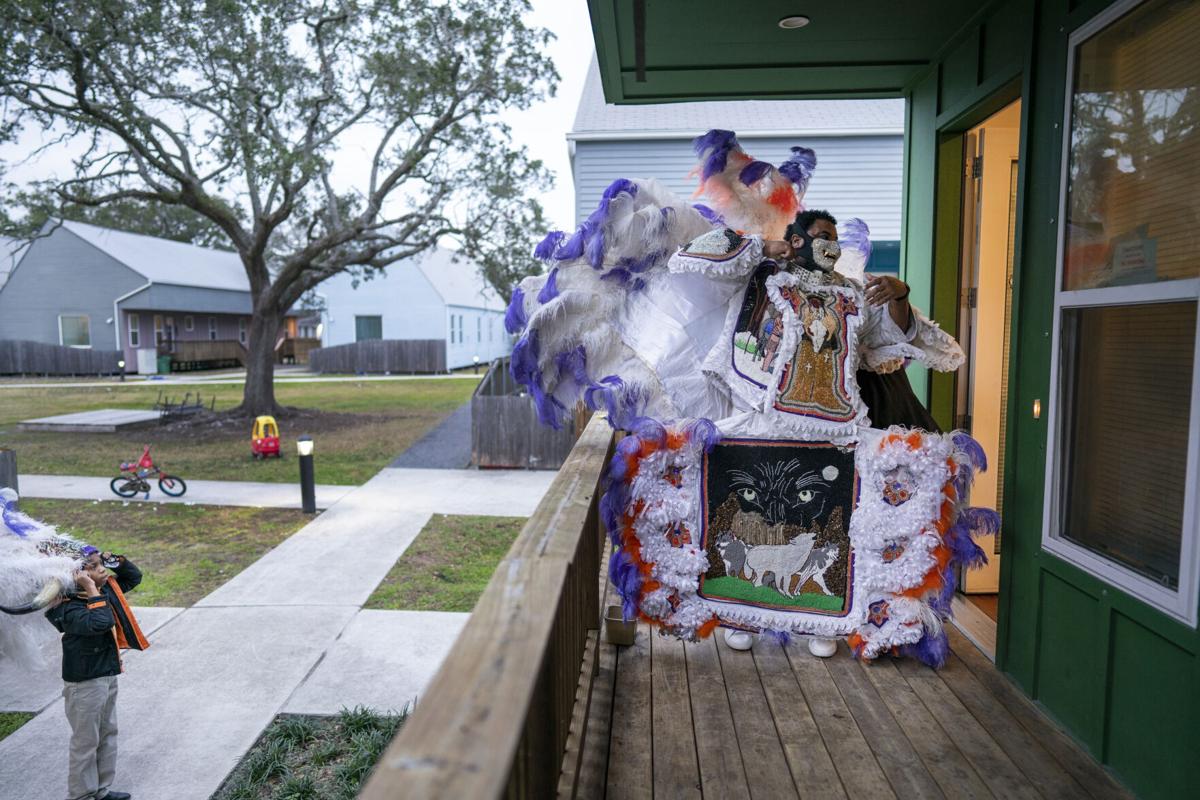 Marvin Belisle, Wild Man with the Wild Magnolias, gets dressed on his porch in New Orleans while his son, Wyatt, 9, watches from the sidewalk on Tuesday, December 15, 2020. (Photo by Chris Granger | The Times-Picayune | The New Orleans Advocate) 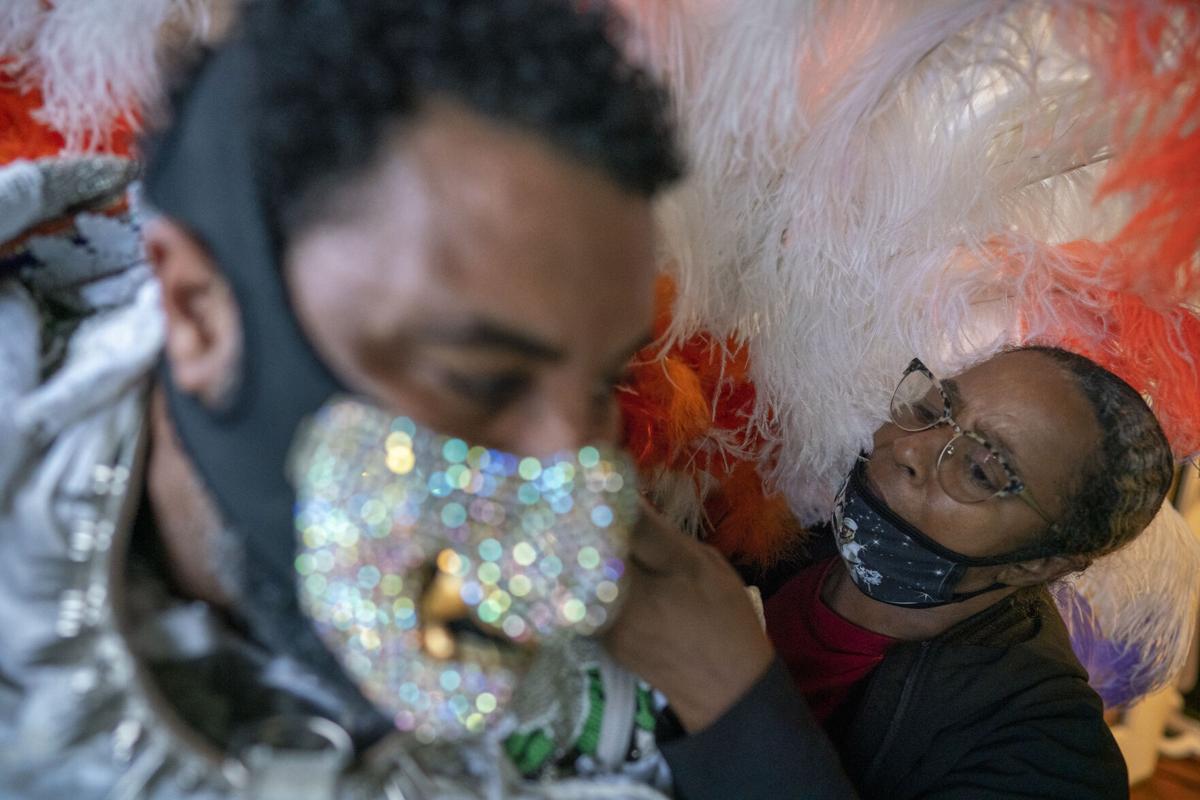 Marvin Belisle, Wild Man with the Wild Magnolias, gets help from his mom, Wonona, in getting dressed outside their home in New Orleans on Tuesday, December 15, 2020. (Photo by Chris Granger | The Times-Picayune | The New Orleans Advocate)

Marvin Belisle, Wild Man with the Wild Magnolias, wears his new suit while standing in his New Orleans neighborhood on Tuesday, December 15, 2020. (Photo by Chris Granger | The Times-Picayune | The New Orleans Advocate)

Marvin Belisle, Wild Man with the Wild Magnolias, wears his new suit while standing in his New Orleans neighborhood on Tuesday, December 15, 2020. (Photo by Chris Granger | The Times-Picayune | The New Orleans Advocate)

Wyatt Belisle, 9, whose dad, Marvin, is Wild Man with the Wild Magnolias, touches the front of his dad’s suit while standing in front of their New Orleans home on Tuesday, December 15, 2020. (Photo by Chris Granger | The Times-Picayune | The New Orleans Advocate)

Marvin Belisle, Wild Man with the Wild Magnolias, gets help from son, Wyatt, 9, in getting dressed outside their home in New Orleans on Tuesday, December 15, 2020. (Photo by Chris Granger | The Times-Picayune | The New Orleans Advocate)

New Orleans’ Mardi Gras Indians have been stymied by the coronavirus, just like everyone else.

Sure, most would love to burst onto the streets on Mardi Gras morning 2021 in Technicolor feathers, to the sound of tambourines and shouting. But drawing a crowd of family, friends and fans is risky business these days, and it’s a risk most Black Indian maskers don’t plan to take.

“I’m not going to do nothing, me,” said Big Chief Monk Boudreaux, of the Golden Eagles. At 79, Boudreaux said he planned to “let it all roll by” and “live to fight another day.”

According to Golden Eagle Flag Boy Marwan Pleasant, by mid-December in a normal year, preparations for Mardi Gras would already be underway.

“We’d be having Indian practice, staying up late, sewing, spending money on materials and fabric to make suits,” he said.

This year, some maskers have begun new suits, unsure of when they’ll be able to wear them publicly. Others are taking the year off.

Bo Dollis Jr., Big Chief of the Wild Magnolias, said his tribe considered coming out in 2021, wearing last year’s suits, “just to have fun.” But, he said, when the city canceled float parades, “we pulled the plug on everything.”

Last March, Dollis feared he’d get a phone call informing him that Belisle had died of COVID-19 complications. The Wild Man’s condition was beyond dire. He was on a ventilator in the VA hospital, and his kidneys were failing. His heart stopped and had to be restarted.

Belisle, 43, isn’t sure why it took him so long to join the Wild Magnolias. He’d been buddies with Dollis forever and had always been interested in the masking customs. But he’d never taken the plunge, until last year, when he told Dollis he thought he was ready.

At 6-foot-4 and 325 pounds, Belisle is as big as an NFL offensive lineman, which made him perfect for the role of Wild Man, the tribe’s peacekeeper.

Dollis helped him learn to sew the endlessly intricate patches and apply the feathers. It took an arduous year’s work to complete his suit, but the 150-pound finished product was fabulous. Black bull’s horns rose from his headdress, which was surmounted by an ominous beaded skull. The glowing eyes of a beaded black wolf stared from his apron.

“Mardi Gras morning, when I put that suit on, it was like my whole personality changed,” Belisle said. “I felt like I was on top of the world. I saw the people taking pictures, marveling at me. I was like, ‘Wow!’”

His 9-year-old son Wyatt Belisle was enchanted by the purple, white and orange suit. After the excitement of his first Mardi Gras march, Belisle displayed the assembly of feathers, beads and horns in his living room like a giant sculpture, as life returned to normal.

Belisle, a disabled veteran who served in the Middle East and a single dad, spent his days caring for Wyatt and making DoorDash food deliveries.

He knew about COVID-19, of course, but when he first felt ill, he didn’t realize the mysterious new virus was the cause. The medicine his doctors prescribed didn’t help his fever, chills and headache. Dollis suggested he get to the hospital, where Belisle called his mother, Wonona Carbo, to say he was being admitted.

Belisle spent almost two months in the hospital, and more than two weeks unconscious on ventilation. As the days dragged on, Carbo tended to young Wyatt and Belisle’s two American Bully dogs. On one trip to her son’s home to feed the dogs, she noticed that Wyatt had wandered to the living room, where he stood in front of his father’s great suit. Wyatt’s arms were raised, and he was uttering words she couldn’t understand, Carbo said.

“I don’t know what he was saying; he was just chanting,” she said. Grandma asked him what he was doing and “He said he was talking to God,” Carbo said. “I said, ‘OK.’”

As Wyatt explained, “I was praying to make my dad feel better and stuff.”

Three days later, Carbo said, Belisle was removed from the ventilator and began edging back to wellness. Belisle said that while on the ventilator he had hallucinations. “I could see my son in my head,” he said. “I kept saying to myself, ‘I’ve got to get out of here and get to my son.’”

After almost 10 months, Belisle said he’s not completely recovered, but he’s much, much better. Now that he’s had some sewing experience, the Wild Man has begun confidently crafting his next suit for whenever it’s possible to wear it. Wyatt may mask too, whenever the Indians are able to safely march again.

Nobody understands the attraction of hitting the streets on Mardi Gras morning better than Belisle, whose life came so close to ending. But nobody knows the danger of taking chances during the coronavirus contagion better either.

“I feel it’s a double-edged sword,” he said. “I love Mardi Gras. I love Carnival. I love it all. But I don’t want to see anyone go through what I went through.”