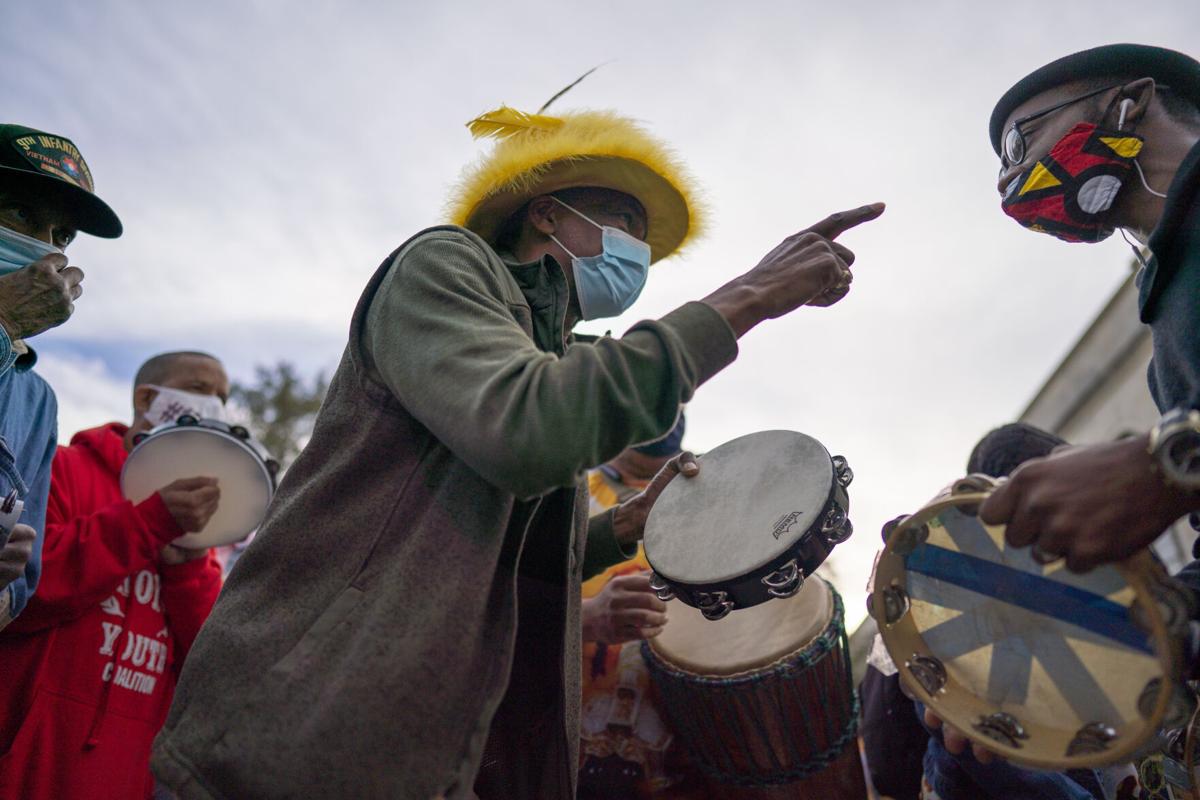 Darryl Montana, center, the son of the late Big Chief Allison ‘Tootie’ Montana, joins others as they play their tambourines in Congo Square for the start of Twelfth Night in New Orleans on Jan. 6. The blessing of the tambourines was part of this year’s Big Chief Tootie Montana Day, as proclaimed by the city of New Orleans. 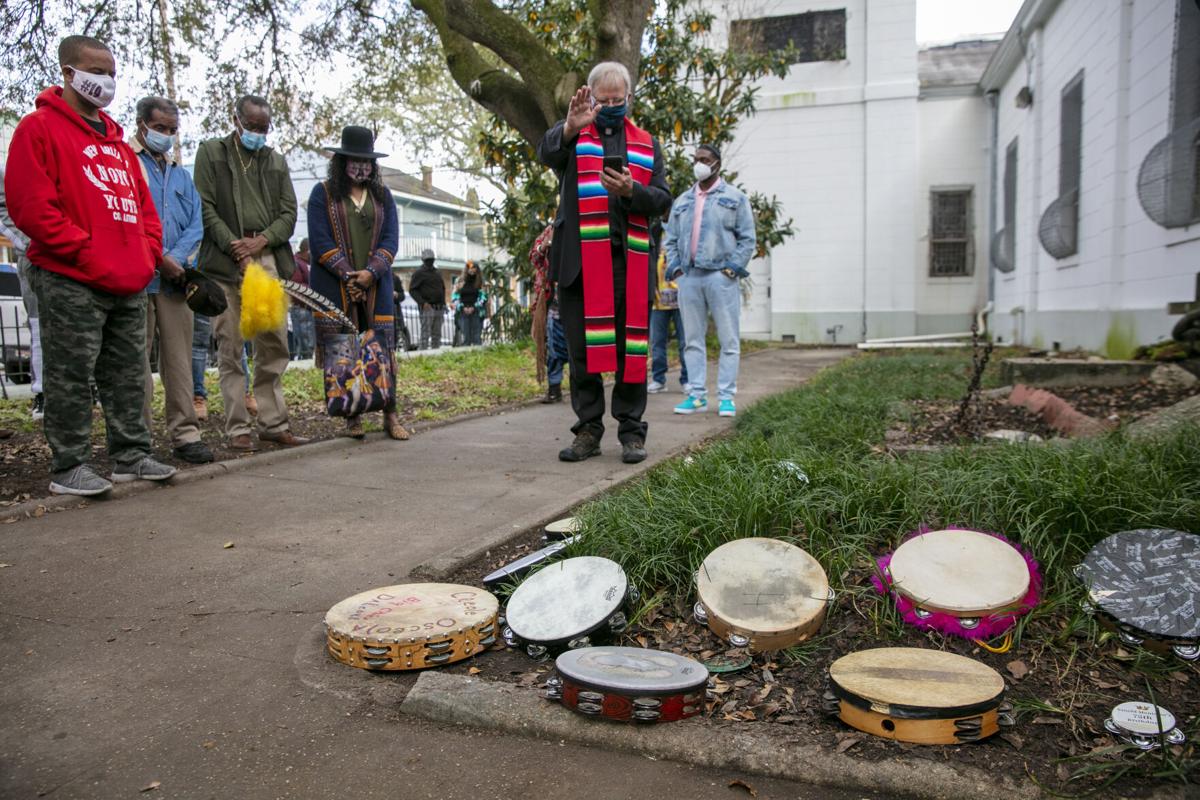 The Rev. Dwight Hoeberechts blesses tambourines outside St. Augustine Catholic Church on Kings Day. The blessing was also part of this year’s Big Chief ‘Tootie’ Montana Day, as proclaimed by the city of New Orleans.

Cinnamon Black dances to the singing and drumming in Congo Square for the start of Twelfth Night in New Orleans on Jan. 6. A blessing of the tambourines was held as part of this year’s Big Chief ‘Tootie’ Montana Day as proclaimed by the city of New Orleans.

The Rev. Dwight Hoeberechts pours Holy Water onto tambourines outside St. Augustine Catholic Church for the start of Twelfth Night in New Orleans on Wednesday, January 6, 2021. The blessing was also part of this year’s Big Chief ‘Tootie’ Montana Day, as proclaimed by the city of New Orleans.

The Rev. Dwight Hoeberechts blesses tambourines outside St. Augustine Catholic Church  on Kings Day, Jan. 6. The blessing was also part of this year’s Big Chief ‘Tootie’ Montana Day as proclaimed by the city of New Orleans.

Family and friends gather during a wreath laying ceremony to honor Allison ‘Big Chief Tootie’ Montana at the Montana statue in Armstrong Park in New Orleans on Friday, January 6, 2012.

Tambourines rattled and popped around the life-size, bronze statue of the late Big Chief Allison “Tootie” Montana in Armstrong Park on Wednesday as family members, friends and fans of the late Mardi Gras Indian leader gathered to honor his memory.

It was Kings Day, the customary start of the Carnival season. Since 2012 it has also officially been “Tootie” Montana Day in New Orleans.

Montana, the Big Chief of the Yellow Pocahontas tribe, was the most influential Mardi Gras Indian leader in the modern era. He’s credited with setting the standard for spectacular suit-making and artistic competition between tribes.

Montana lost his life defending Mardi Gras Indian customs. In the summer of 2005, New Orleans police broke up a Mardi Gras Indian gathering in Central City, provoking outrage among everyone who held the age-old masking tradition dear. As 82-year-old Montana decried the harassment of Mardi Gras Indians before the City Council, he was seized with a heart attack and subsequently died.

On Wednesday, “Tootie” Montana’s son Darryl wore a brilliant, canary-yellow, feathered hat as he led the assembly in the singing of “Indian Red” and other age-old chants. Photographers vied for position to capture the scene as dancing broke out here and there.

Before the singing began, “Tootie” Montana’s daughter Denise Montana-Stevenson declared that the custom of sewing elaborately beaded suits every year to be debuted on Fat Tuesday morning must continue. That’s despite the fact that being a Black Indian masker isn’t easy.

“My father told me that you can’t just like it,” she said. “you have to love it.”

Darryl Montana, who succeeded his father as the Big Chief of the Yellow Pocahontas, agrees. He told the crowd that carrying on the expensive and time-consuming custom is a responsibility as well as a recreation.

“Tootie” Montana had sewn a new suit annually for 52 years, he said. But, his father told him, only the first 10 years were for his own pleasure, the rest were for the community that has come to count on the spectacle.

Ordinarily, Mardi Gras Indians would be busy at this time of year, racing against the Mardi Gras deadline to finish their suits. But the raging COVID-19 pandemic has sidelined many maskers.

Since gathering to march on Mardi Gras morning as usual may be hazardous health-wise, and since there won’t be the normal crowds of onlookers anyway, many Mardi Gras Indians are skipping 2021 entirely.

Mardi Gras Indians are in coronavirus limbo, which a Wild Man knows all too well

But not Darryl Montana. The 65-year-old plans to “feather up” for the first time in four years. His 2021 suit will be his 49th. He said he and his father had a gentlemen’s agreement that he wouldn’t break the older man’s record of 52 suits, but on the other hand, he imagines his dad would want him to carry on for as long as he cares to.

Montana said that once he put down his needle and thread, he never thought he’d start again. “It’s hard to work at that level,” he explained, “you really don’t have a life. But people say that IS my life.”

“Once you’ve walked in those shoes, you realize that’s my calling,” he said.

And this year, he felt called to come back, coronavirus or not, to revitalize the group.

Montana is not oblivious to the danger of the rampaging disease. Quite the opposite. In April, he said he visited an ER to be treated for dehydration following a bout of fatigue, fever, loss of appetite and nausea. Days after he’d recovered he was informed that he had tested positive for COVID-19.

Montana said his 2021 suit will be significantly lighter than some of the creations he wore in the past. Enormous headdresses were a signature of Montana-made suits. Recently, he said, he struggled to lift one of his past headdresses that was being packed up for an exhibit in an art museum.

“I said, ‘I have to have been crazy to hold up that weight,’” he recalled, laughing.

Montana won’t be alone debuting a new suit in 2021. This year he invited Dianne Honore, a Black culture historian and leader of both the Amazons Benevolent Society marching group and the Black Storyville Baby Dolls, to join him as queen of the Yellow Pocahontas.

Honore said she plans to come out in her hand-made, feathery regalia on Mardi Gras morning, “even if coming out means coming out on the front porch or coming out in the backyard.”

Montana hasn’t ruled out marching around the block if it seems safe to do so. “I’ll abide by what the city says,” Montana said, “but we haven’t lapsed in our sewing.”

“We’re trying to find out what our role is in this,” he said.

Honore said that part of the role of the Mardi Gras Indians is to be the embodiment of memory. The Kings Day ceremony at the statue of “Tootie” Montana “opens the season for Black culture” she said.

Blacks “were an oppressed people, and a lot of these traditions — the Baby Dolls, Skull and Bones and others — come out of that oppression,” she said.

Montana said he began masking when he was just 9 years old. The term Mardi Gras Indian may be more common, he said, but in his 7th Ward neighborhood, maskers described themselves as “Black Indians.”

Before Wednesday’s ceremony in Armstrong Park, a dozen Black Indians gathered at St. Augustine Catholic Church, where a priest blessed their tambourines.

Before that, 10 members of the Montana family took a bus tour of sites significant to “Tootie” Montana’s life.

Darryl Montana said Wednesday’s activities included a poignant touch as he recalled family members and friends who are no longer around to join in the chanting and dancing. Just last weekend, he said, he sang at the funeral of a friend who’d been murdered.

“You never know who’s going to be next,” he said.

In life, “Tootie” Montana was known as the Chief of Chiefs to his fellow Mardi Gras Indians and fans of the phenomenon. In the future, he may become known to an even wider public. In November, the New Orleans City Council Street Renaming Commission proposed that Tulane Avenue, which is now named for a contributor to the Confederacy, be dubbed Allison “Tootie” Montana Avenue.