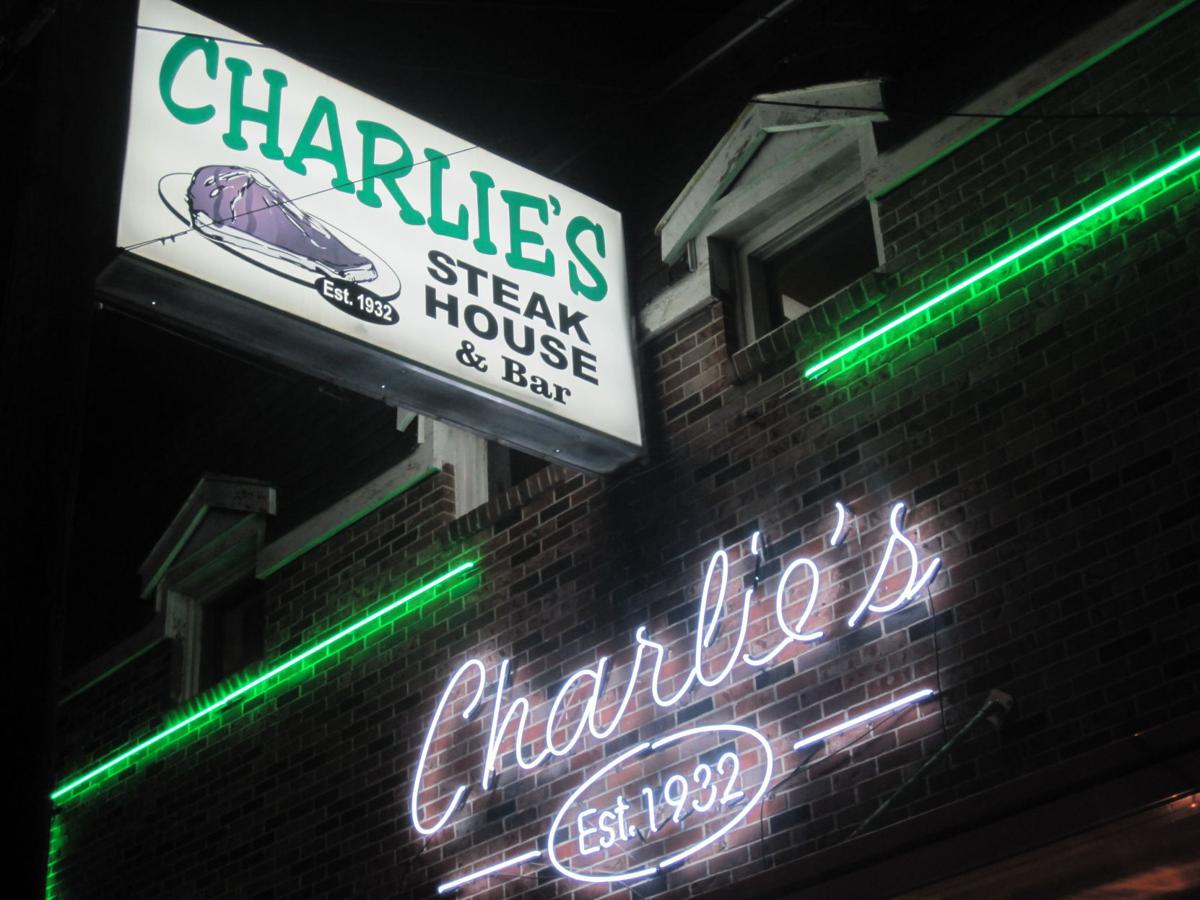 Charlie’s Steak House first opened in 1932 in Uptown New Orleans and evolved many of its own traditions and quirks through the generations. 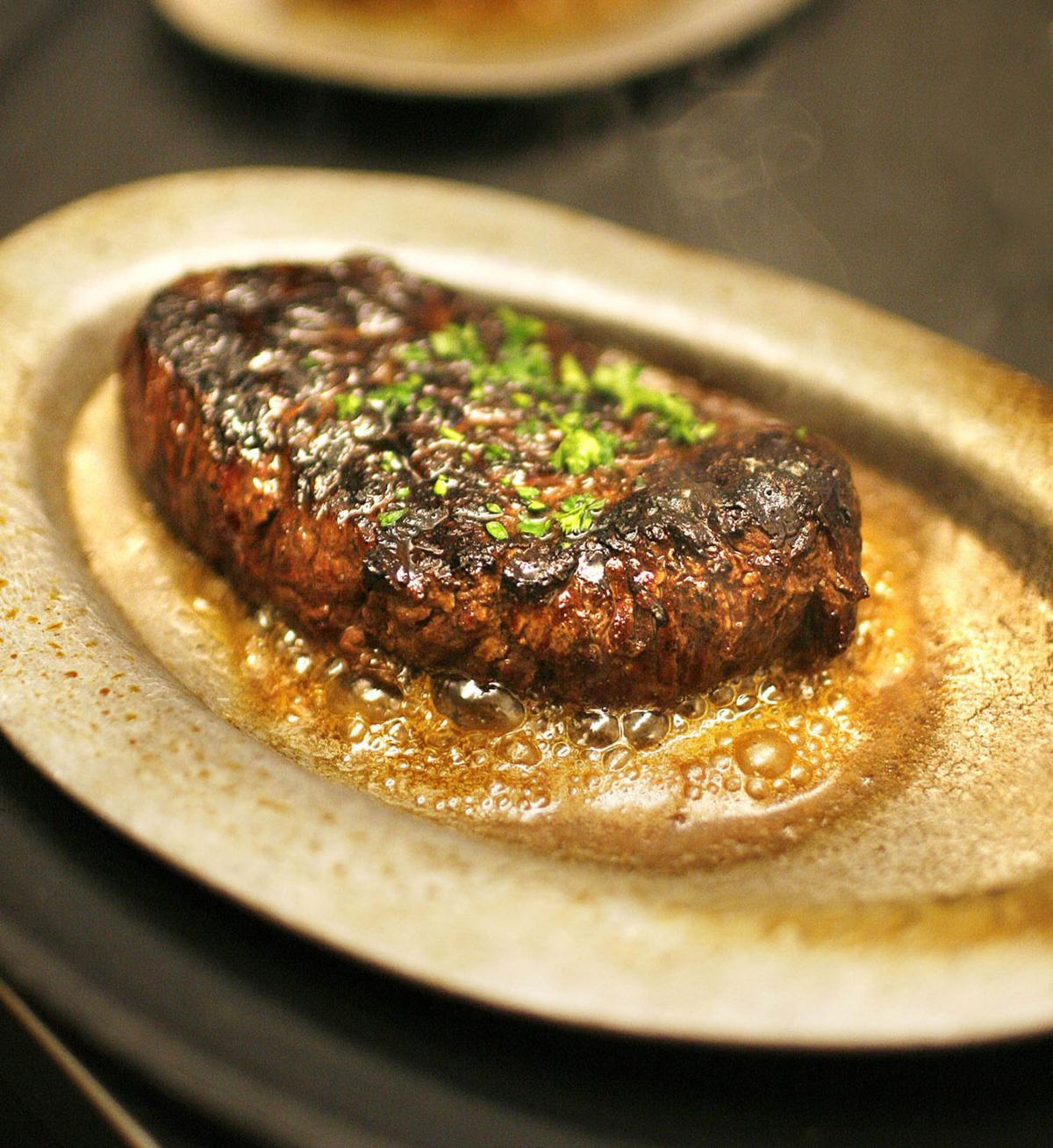 A steak sizzles on a metal plate at Charlie’s Steak House in New Orleans (Chris Granger / NOLA.com | The Times-Picayune)

Matthew Dwyer was a bartender who picked up shifts at Charlie’s Steak House before Hurricane Katrina. He later bought the New Orleans classic and reopened it. Dwyer died in 2020.

Steve Sones, shown here in 2018, has been a waiter at Charlie’s Steak House since the New Orleans classic reopened in 2008. Steaks arrive sizzling on hot iron platters.

Charlie’s Steak House originally opened in 1932 and reopened after Hurricane Katrina in 2008, keeping a low-key atmosphere.

Steve Sones, a waiter at Charlie’s Steak House since its post-Katrina return, whisks a tray of steaks past a portrait of the late Dottye Bennett, a longtime waitress here.

The doors at Charlie’s Steak House have been closed since the untimely death of proprietor Matthew Dwyer last summer. But his family left the lights on as a symbol that this low-key Uptown institution would return.

“We wanted everyone to know we wouldn’t turn the lights off on Charlie’s,” said Owl Dwyer, the late restaurateur’s brother. “We wanted people to know Charlie’s would be back.”

Now, Charlie’s Steak House is poised to make that comeback through a new partnership. That includes local chef Aaron Burgau and his wife Kim, Sadie and Brian Stewart, Jamie and John Cangelosi and members of the Dwyer family — Owl and his wife Heady.

A sales deal between the new partners and the family closed Dec. 9, Burgau confirmed.

He says they plan to reopen Charlie’s on Jan. 5.

The three families joining the Dwyer family here are all longtime friends. They say they’re investing in the business together to bring back a New Orleans classic too valuable to let disappear.

“Everyone else who looked at buying the place wanted to make it condos or turn it into something else,” Burgau said. “We wanted to keep it the same. I mean, it’s Charlie’s.”

A steakhouse with the soul of a New Orleans neighborhood joint, Charlie’s has always been more about character than cosmetics.

It’s known for an unfussy, everyman attitude, plus-sized T-bones sizzling on burly metal platters and an approach to side dishes that proves the words “au gratin” can be a term of endearment.

It is full of stories, quirks and time-honored oddities — like the menu, which is never printed but recited tableside.

Matthew Dwyer died at his Algiers home on June 26 at age 49, from what was attributed to a health condition. Charlie’s has been closed since.

Owl Dwyer said the family was determined to keep Charlie’s going because his brother’s own efforts to bring the restaurant back after Hurricane Katrina had meant so much to him.

“He would have wanted Charlie’s to continue, he loved Charlie’s,” Dwyer said. “We’re really grateful the right people stepped up to do this.”

Brian Stewart is an owner of the Bayou State Automotive Group car dealerships. He and Sadie live near Charlie’s and had struck up a friendship with Matthew Dwyer at the restaurant, and around Brian and Matthew’s shared devotion to the Chicago Cubs. Jamie and John Cangelosi are both local attorneys.

Stewart said he and his partners understand that the appeal of Charlie’s runs through the memories that generations of regulars bring with them, and that’s what they want to preserve.

“There aren’t many places like this left in the country,” Stewart said. “It’s a piece of history.”

Burgau is co-owner of two much more modern restaurants — the upscale bistro Patois and the casual Central City BBQ. Though known as a chef, mostly what he’s bringing to Charlie’s are skills as an operator. He wants to keep the old restaurant going, and keep its traditions alive.

“One thing about Charlie’s, it’s a place people come to from all over,” he said. “It’s a destination.”

Reopening will be more about restarting a restaurant that been on hiatus, rather than recasting it under new ownership, Burgau said. Many of the same staff from before will be back on duty, including Glenn Bove, manager here for the past decade.

Still, there will be some changes when the restaurant reopens. Neil McClure, who formerly ran his own restaurant McClure’s BBQ at the NOLA Brewing taproom, will lead the Charlie’s kitchen. Burgau said he wants to expand the wine list and bump up the quality of the steaks the restaurant buys.

Matthew Dwyer owned Charlie’s for 12 years, and he frequently described his role as steward, the caretaker for a legend. But it was Dwyer who brought Charlie’s back to life when it looked like that legend might’ve run its course.

The New Orleans native worked for many years as a bartender. After moving into a shotgun next door to Charlie’s he occasionally picked up shifts pouring drinks at the steakhouse. It was a casual work arrangement that spurred an intimate connection with the original owners, the Petrossi family.

After Katrina, the restaurant sat empty, with its prospects in limbo. But by 2007 Dwyer was able to buy it from the Petrossi family, and he reopened it the following year. Because of storm damage and many years of deferred maintenance, reopening it then required a massive overhaul. That was tricky business at a historic restaurant prized for the impression that it was immune to change. But Dwyer kept its character intact while gently updating its systems and menu offerings.

Of course, that menu would never be printed, and that’s a facet of the old place that will continue.

“The menu, or lack of a menu, is ready to go,” said Owl Dwyer. “We’re excited to see Charlie’s come back.”

Note: this story has been updated with a target opening date.