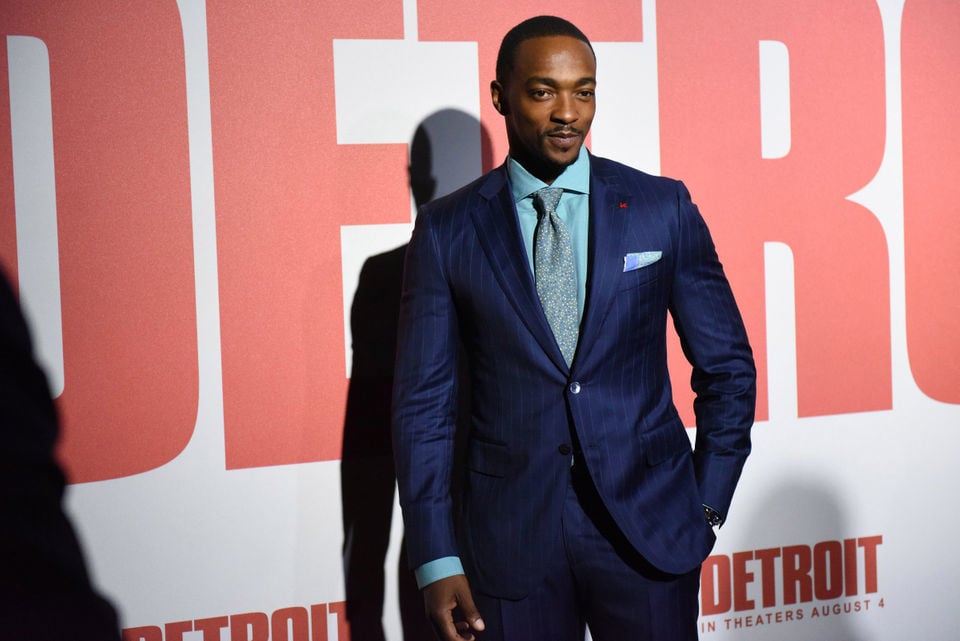 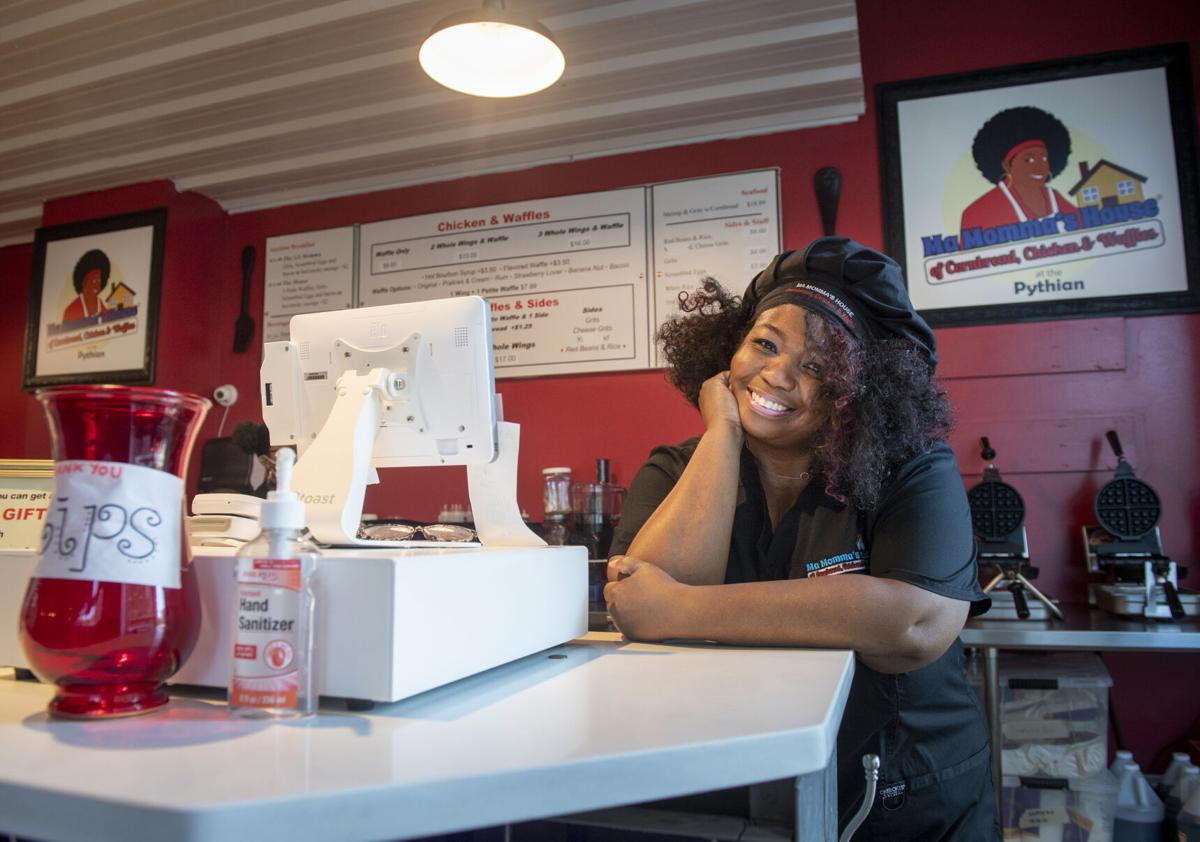 Nicole Mackie, who runs Ma Momma’s House of Cornbread, Chicken and Waffles in Pythian Market in New Orleans. She was photographed on Thursday, November 12, 2020. (Photo by Chris Granger | The Times-Picayune | The New Orleans Advocate)

In “Synchronic,” New Orleans actor Anthony Mackie, right, and Jamie Dornan play a pair of Crescent City paramedics who trace a series of gruesome deaths to a new underground party drug that has a remarkable, and terrifying, effect on those who take it.

Anthony Mackie, the New Orleans-born Hollywood star, has been recounting a family anecdote while on the promotion trail for his science fiction film “Synchronic.”

“When I’m shooting a movie in New Orleans, it’s like I’m the rich cousin,” Mackie, best known for his role as Falcon in the Marvel Universe Avengers franchise, told Jimmy Fallon on “The Tonight Show” last month. “We’re shooting one night, you know, on the river, and my cousin pulls up with a barbecue grill on the back of his truck fully going.

The story has the ring of a press junket yarn, but Mackie’s older brother, Calvin Mackie, a former Tulane University engineering professor and founder of educational non-profit STEM Nola and several other ventures, says it is indeed accurate.

“I know exactly what cousin it is, though I don’t think I’m at liberty to say,” Calvin Mackie said with a chuckle. “That kind of thing happens a lot.”

Anthony Mackie might be the most famous member of his extended New Orleans clan, but Calvin Mackie said his brother’s “Tonight Show” laugh line tells a broader truth about an entrepreneurial vein that runs through the entire family.

If all of the independent lines are traced, the family’s New Orleans business empire includes a burgeoning restaurant chain, a decades-old roofing contractor, a French Quarter club, a music production company and a nonprofit that promotes science and engineering.

And of course, a world-spanning acting career and a truck-transported barbecue grill.

Everybody on the roof

The family’s entrepreneurial roots trace back to Calvin and Anthony’s father, Willie Mackie, and their uncle, James. Those two brothers started out as sharecroppers in St. Francisville then set off for New Orleans as teenagers in the 1950s in search of opportunity.

“My dad dropped out of school in the eighth grade to pick cotton. My mother went to a state-approved Negro high school,” Calvin Mackie said. “We grew up in a house with no books, but my dad started a roofing company with [first cousin] Earl’s dad in 1965 in the aftermath of Hurricane Betsy, and that pretty much changed the trajectory of our family.”

Through the 1970s and ’80s, Mackie Roofing became one of the largest roofers in New Orleans, and its Broadmoor warehouse began wholesaling construction supplies.

Earl Mackie Jr., 49, now runs his Mackie One Construction business from the same Erato Street location as his father, James, and uncle Willie, who died soon after Hurricane Katrina. He said the extended family members were required to learn the ropes working there during long, hot New Orleans summers.

In a 2011 interview, Anthony Mackie told New Orleans Magazine he remembered that on the first day of summer vacation when he was 13, his father woke him at 7 a.m. to tell him it was time to go to work. From then on, he was working on roofing projects every day until school started again.

“When we were teenagers, everybody had to come on the roof — Calvin, Anthony, everybody. It was mandatory,” said Earl. For the owners combined six daughters, there were roles in the office.

Earl Mackie, whose wife, Nicole, describes him as a serial entrepreneur, had ambitions to “get off the roof” and branch out. So in the 1990s while still a communications major at the University of New Orleans, the couple started “Positive Black Talk”, a cable television show aimed at presenting positive images and role models for Black people in New Orleans.

Fundraiser events for the show led Earl Mackie to found Take Fo’ Records, which was one of the originators of bounce music with artists such as DJ Jubilee, Choppa and BabyBoy.

“It did pretty well, but I was navigating all that from here at the warehouse where I was also managing. You know, like, ‘Hey, man, you need your roof fixed’ one minute then dealing with artists the next,” Earl Mackie said.

But when Nicole Mackie graduated from Xavier University and embarked on a career in banking, she told her future husband, “You need to do something more solid than the music industry.”

Actor Anthony Mackie grew up catching throws from Bacchus. For Mardi Gras 2016, he IS Bacchus

So Earl Mackie got his real estate license and started Payton Property Management, to buy and manage properties, as well as Mackie One Construction to build and renovate houses.

Katrina led to upheaval, scattering the extended family from their Gentilly base. But it also led to opportunity as so many houses needed repair after the storm.

The roofing and construction business remained solid even as the music operation waned. Still, Earl Mackie decided that to scratch the creative itch he would delve into the restaurant business when cheap post-Katrina store leases became available in New Orleans East.

On a whim, he snapped up a lease for a store next to a daquiri shop on Crowder Boulevard with the vague intention to do a New Orleans version of Roscoe’s House of Chicken and Waffles.

“My wife was like, ‘What do you know about the restaurant business?’ And I said, ‘I don’t. I’m going to have to hire me a restaurant guy,'” he said.

The first iteration of the restaurant struggled because of a bad partnership. In 2013, it was rebranded Ma Momma’s House of Cornbread, Chicken and Waffles with a menu around the recipes of Earl Mackie’s mother, Willie Mae Mackie.

They added other items like Earl Mackie’s powerful house punch and strawberry lemonade from LJ Squared, a company started by Earl and Nicole Mackie’s children, Jordan and Jazmyn, and their cousin, Lauren.

Earlier this year, Ma Momma’s House opened its second outlet in the Pythian Market in the Central Business District, the only location currently open as New Orleans rides out the coronavirus pandemic.

As if to underline his Uncle Calvin’s point, Jordan Mackie realized early that he wasn’t cut out for the rough and tumble of football, even though he loved being involved in the game. Luckily the coaches at his high school, Warren Easton Charter High in Mid-City, recognized his aptitude for organizing and made him the team “turk”, a kind of general-purpose coaches’ assistant.

For Calvin Mackie, STEM Nola has finally begun to reach the level of ambition he had for it when it started in 2013. A lifelong academic, Calvin also has been an educational entrepreneur since he founded education consultants Channel ZerO Group in 1992, four years before he finished his Ph.D. in mechanical engineering at Georgia Tech University.

The nonprofit is now on track to double in size next year, after it won a $3 million Department of Defense contract to replicate, for military communities in the Gulf region, its program that has helped about 50,000 New Orleans kids pass through various STEM engagement initiatives, such as its artificial intelligence and robotics summer camps.

An even bigger step-change for STEM Nola is coming after Ochsner Health System donated a 42,000-square-foot building on Crowder Boulevard in New Orleans East to serve as a new business hub.

Mackie said he is on the way to raising $10 million as an endowment to sustain the nonprofit. He plans soon to add a for-profit division that will produce science kits and other educational materials.

He describes himself as an “eduvangelist”, a preacher of the importance of a good education. He has made it his life’s mission, he said, to elevate careers in business, engineering and science to the same status as glamorized “pie-in-the-sky entertainment and athletics,” particularly for children from historically disadvantaged communities.

For all of his family’s success, Calvin Mackie thinks his father and other relatives could have done much better if it hadn’t been for racial barriers in business.

Anthony Mackie’s other movie release this year, “The Banker,” is about a Black businessmen in the era when his father and uncle were starting out. Mackie portrays the real-life Bernard Garrett, who had White men front for him as he built a property and banking empire in 1950s and ’60s Texas and Los Angeles.

Even now, Calvin Mackie said, it has proven difficult for someone such as himself to get financial backing, despite the fact he earned four STEM degrees in 11 years and had managed multi-million dollar budgets as a tenured professor at Tulane.

He is now on the board of Propeller, one of the startup incubators that sprung up in New Orleans after Katrina with the aim of helping small businesses grow, though he had to overcome initial skepticism.

After several failed attempts to get backing from incubators, Mackie said, “The message was very clear to me: These things were not created for people from New Orleans. So, when Propeller approached me about joining I was like, ‘Hell, no’.”

But the Propeller association since 2016 has made all the difference, Mackie said, working as a kind of business consulting service to channel him to funding, advice and connections. He convinced Earl and Nicole Mackie to overcome their similar skepticism and go through the Propeller program.

“If my dad and uncle would have had access to something like Propeller when they were in their business, they may have been the largest roofing company in the state of Louisiana,” Mackie said.

Still, he adds, “It was them coming from the cotton fields of West Feliciana and starting their own company in 1965 that has given all of us, even Anthony the actor, the entrepreneurship bug.”