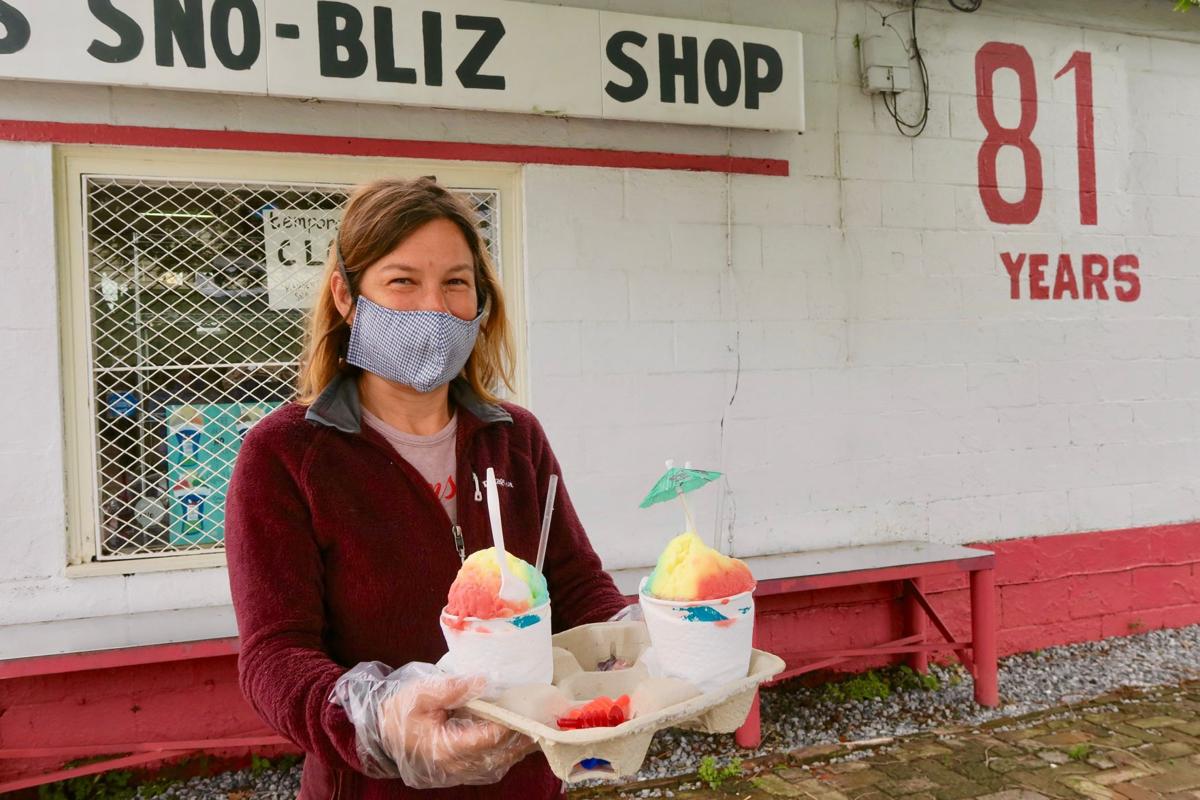 Ashley Hansen, third-generation proprietor of Hansen’s Sno-Bliz in New Orleans, on a trial run of curbside sno-balls the day before her classic Uptown shop reopened on new terms for the pandemic restrictions. 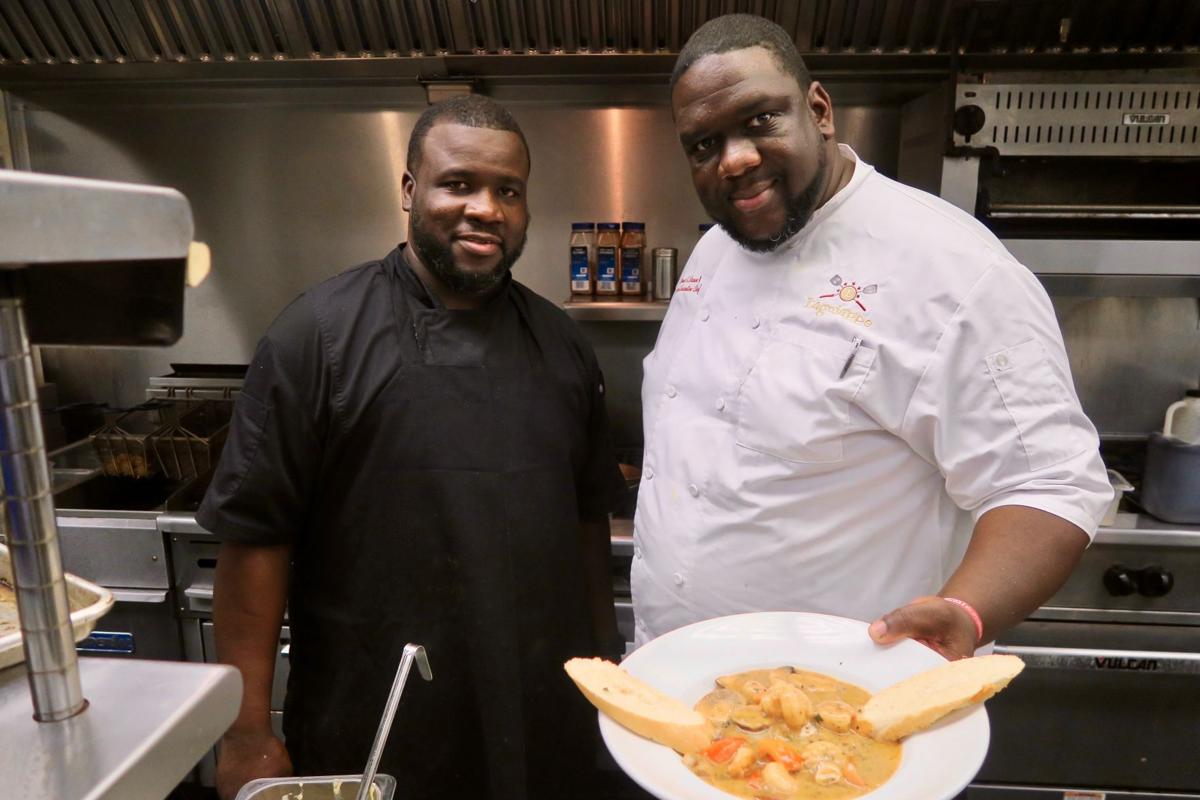 Hansen’s Sno-Bliz is guided by a slogan well-known to those who have lined up outside the generations-old sno-ball stand: There are no shortcuts to quality. For proprietor Ashley Hansen, however, right now there’s also no clear path ahead to bring this New Orleans classic through the coronavirus fight.

Hansen shut down the sno-ball stand March 15, before any businesses were ordered closed, wanting to do her part to slow the pandemic spread. With financial woes mounting and official help elusive, she now wonders if that was a mistake.

“We’re at the desperation stage; we need to reconnect with the community,” Hansen said. “Without support from banks or government, all we have is the community.”

So last Thursday, she put on a mask and gloves and reopened Hansen’s Sno-Bliz with a shortened menu, curbside service for phone-in orders and dread that if she didn’t do something, the business her grandparents founded in 1939 could slip away.

“This place is a working heirloom,” she said. “I can’t lose it.”

Across a city famous for its food scene, six weeks of business shutdowns and the nebulous prospects for what lies ahead have left restaurants fighting to survive.

While many of their regulars have cheered as familiar New Orleans restaurants that shut down earlier in the crisis have announced reopening plans, business as usual at these familiar places is off the table. They are frantically recasting their business models in a fight where the rules keep changing and the picture of what victory would even look like is unclear.

When Gov. John Bel Edwards extended Louisiana’s stay-at-home order to May 15, he gave a glimmer of what may come next. If public health data supports a gradual reopening, the state’s first phase would include reopening restaurants at 25% capacity, joined with other measures meant to reduce close contact. Occupancy would be gradually increased in later phases.

Some restaurateurs are returning to have a running start when that limited level of business is allowed. But reopening now, on any terms, is also a way to generate at least some revenue after a long drought.

The main source of government support in this stretch was supposed to come through loans from the Small Business Administration. But beyond well-publicized criticism for payouts to large corporations and chains, the loan program has proven a poor fit for many restaurants in this crisis.

One primary industry complaint is that it requires staffing to return to previous levels when restaurants cannot predict when they’ll be allowed to resume normal capacity, or when enough business might return to keep those employees working.

Trade groups, including the National Restaurant Association and the newly formed Independent Restaurant Coalition, have been lobbying Congress for more targeted economic survival measures for their industry.

In the meantime, local restaurants have been on their own, and they’ve been trying to find new ways to survive under the restrictions of social distancing.

“The programs, as they’re written, have put us in a position that we have to get something going, even if it’s very small,” said Neal Bodenheimer, co-founder of Cure and Cane & Table, which both reopened April 30.

Cure is best known for cocktails. It won the James Beard Foundation’s award for best cocktail program in 2018. But with bars still ordered closed, Bodenheimer restarted with the restaurant portion of Cure, under a separate license. On Thursday, he was filling frozen margaritas from a daiquiri dispenser and shuttling bags of smoked fish dip and pimento cheese over a makeshift takeout counter, the makings for DIY happy hour spreads his customers brought home.

“At some point, we all have to do our best to save our businesses,” Bodenheimer said. “Knowing what a pass-through business it is, how much of the money we take in that we pay out to staff and suppliers and services, the ripple effects of us staying closed will be huge.”

Louis Brown and his partners tried to keep their 9-month-old Creole restaurant Southern Charm open with a takeout menu, but it wasn’t working.

“We were making like $60 a day. It wasn’t worth keeping the lights on,” he said.

Their plan B was to turn a defunct daiquiri shop adjacent to the Gretna restaurant into a drive-thru window for boiled crawfish and shrimp.

“We’re doing this just to keep our sanity and keep our name out there so people don’t forget us,” said Brown. “People get it. They’re pulling up saying we want to support you so you can open back up. That means a lot.”

Not everyone is eager to reopen as fast as possible.

For instance, Frank Brigtsen is confident he’ll reopen Brigtsen’s Restaurant, the modern Louisiana bistro he and his wife, Marna, have run since 1986. But he doesn’t think he will for months yet, perhaps in late July or early August.

At 65, and with his own health issues, Brigtsen is practicing strict self-isolation. He’s grateful that his staff is getting unemployment benefits now, though he knows staying closed longer will make a difficult reopening process that much harder.

“When we open in the summer, where’s the business going to come from?” he said. “Even if we’re allowed 50% capacity by then, will that be enough to hire people back?”

To gin up some money in the interim, he penned a cookbook and batched some spice blends. Sold through the restaurant website, it’s a cottage industry economic lifeline he and Marna run from their home.

“The greatest sound to me now is packing tape,” Brigtsen said, finding a small laugh. “That sound of a new roll of packing tape means we’re shipping more books.”

At Hansen’s Sno-Bliz, online T-shirt sales have helped pay a few bills. Orders have come in from around the country, a credit to the extended tribe of New Orleans expats who revere the old place.

This week, as familiar faces pulled up to collect takeout trays of rainbow-patterned sno-balls, Ashley Hansen was smiling behind her face mask. It was good to get back to business, even if the business is changed. She misses seeing kids peering over the counter, watching the sno-ball machine her grandfather designed to do its work.

“It’s hard to do what you love when you can’t do it the way you know, but that’s where we are now,” she said. “I want to hug everyone who comes through here. I just hope a sno-ball can translate to a hug.”

“We had an informative and enjoyable tour of the Garden District.We covered a lot of history, architecture, and celebrity coming and goings